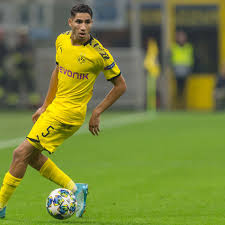 It was noted that the 22-year-old Moroccan has shown skill since joining from Real Madrid in the summer for a fee rising to €45m (£39.67m), which Inter have yet to finally pay off the deal.

Credited to the Inter Milan player Hakimi, who also featured during a two-season loan stay with Borussia Dortmund, has another four-and-a-half years to run on his current contract with Milan.

It must be noted that his eye-catching skills or performances and also with Inter’s present financial position means that they may have to do away with some first-team players at the end of the current season if they must remain profitable.

Also quoted by reliable media house like Calciomercato saying that the skillful player is a player which the Nerazzurri are very confident of making a profit on him if all the parties showing interest are able to met up with the agreement .

Report shows that the Gunners and the Blues have previously been tipped to make a move for the Morocco international in the summer and also with Man City who is currently willing to enter the parking order for the player incase the above fail to meet up the players requirement.

newsaffairng - May 25, 2022
0
Load more
Newsaffairng is a joint venture of great people of like mind and friends who see news in their area as important as the food they eat. The story of our love for infrmation and News was mainly for those who believed that there is no news that is complete until is ready by all.Packed with statistics,fact,figures and insight knowledge of some area(sport,Health & Tech) needed by people to get awareness we hope to provide our reader/viewers something different from the usual. It was designed,developed and maintained with one thing in mind which is to bring to his viewers a first class information on areas of Sport,Health,Technology and general news from the horses month. Newsaffairng is born to provide exclusive player and manager interviews of football and providing viewer/fans with current features,match preview analysis,Technology update and health news etc. Newsaffairng is working on employing a large number of dedicated team of staff editors and freelance reporters to add to the few we have so that they can produce rich content around the world.Both editors and freelance are scattered over the continent with good knowledge of sport(football),Health and Technology. We cover a wider range of topics which have made our reader able to enjoy what we have to offer.
Contact us: Justnewsaffair@yahoo.com

Fernandinho approached by 3 Brazilian clubs as he plans to leave...