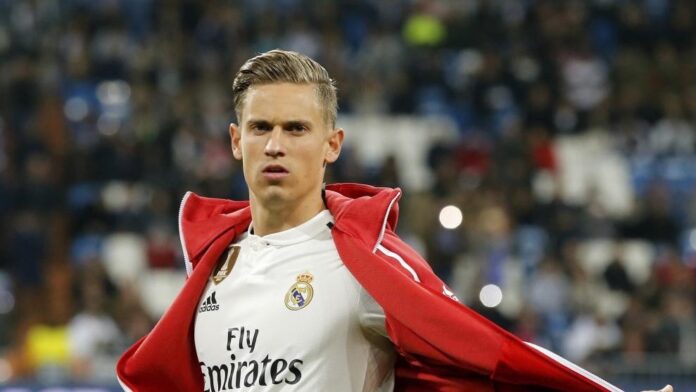 Premier league reporter is saying that United are looking into sighing Atlético Madrid midfielder Marcos Llorente at a rate close to €80m.

Although the Red are very optimistic that they have contacted the La Liga side with an offer which can tempt them to all the deal move.

According to Atletico Boss Diego Simeone’s who openly said they have no plans to sell the 26-year-old but with the tempting ‘succulent proposal’ from the United which might see the management consider the offer for now..

Inhouse information which was confirmed by us is saying with such offer it will help Atlético recover losses caused by the global pandemic and elimination from the Champions League which they consider as a loss too.

It must be noted that there is an obstacle on ground which is difficult in the sense that the former Real Madrid man is very comfortable with the club and he is not willing to leave.

With the current financial situation in the club which Llorente is aware off which might lead to adjusting of all stake holders salary for now and with Manchester United looking at signing the player in the next transfer window.

United Achor man and boss Ole Gunnar Solskjaer’s side still maintain an interest in Llorente and they are ready to place and offer which is very tempting for Atletico to resist for now.

Dani Ceballos not for Us says Arsenal.

newsaffairng - July 2, 2020
0
Load more
Newsaffairng is a joint venture of great people of like mind and friends who see news in their area as important as the food they eat. The story of our love for infrmation and News was mainly for those who believed that there is no news that is complete until is ready by all.Packed with statistics,fact,figures and insight knowledge of some area(sport,Health & Tech) needed by people to get awareness we hope to provide our reader/viewers something different from the usual. It was designed,developed and maintained with one thing in mind which is to bring to his viewers a first class information on areas of Sport,Health,Technology and general news from the horses month. Newsaffairng is born to provide exclusive player and manager interviews of football and providing viewer/fans with current features,match preview analysis,Technology update and health news etc. Newsaffairng is working on employing a large number of dedicated team of staff editors and freelance reporters to add to the few we have so that they can produce rich content around the world.Both editors and freelance are scattered over the continent with good knowledge of sport(football),Health and Technology. We cover a wider range of topics which have made our reader able to enjoy what we have to offer.
Contact us: Justnewsaffair@yahoo.com

Luis Suarez :I’m going to give my all for Atletico till...