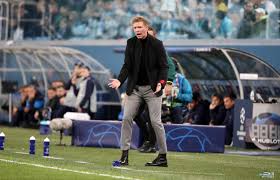 Although it was noted that The Red Devils still feels that despite the team’s indifferent form this season they are still behind Ole Gunnar Solskjaer but with a recent report claiming that Mauricio Pochettino had already been contacted over a move to Old Trafford if Ole fails to step up his games.

Football scout and Manchester United Fans believes that the former Tottenham Hotspur manager Pochettino might be considered for the United position if there was a change in principle and others also sees Nagelsmann as a candidate for the same position.

It must be noted that irrespective of the fact that the 33-year-old Leipzig Boss suffer a 5-0 defeat at Old Trafford in the Champions League last week but he was able to impress many with his work at Hoffenheim .

Based on the performance credited to him, it is still a known fact that Nagelsmann was the youngest manager in Bundesliga history as at when he took over Hoffenheim job in 2015 at the young age of 28 which was simply causes by his early retirement from the game of Football caused by a series of knee issues.

Although judging from the league position presented we know that Manchester United who currently sit at the 15th position in the Premier League table will be looking to avoid a third straight defeat in all competitions when they travel to Goodison Park to face Everton these Saturday afternoon.

newsaffairng - May 1, 2021
0
Load more
Newsaffairng is a joint venture of great people of like mind and friends who see news in their area as important as the food they eat. The story of our love for infrmation and News was mainly for those who believed that there is no news that is complete until is ready by all.Packed with statistics,fact,figures and insight knowledge of some area(sport,Health & Tech) needed by people to get awareness we hope to provide our reader/viewers something different from the usual. It was designed,developed and maintained with one thing in mind which is to bring to his viewers a first class information on areas of Sport,Health,Technology and general news from the horses month. Newsaffairng is born to provide exclusive player and manager interviews of football and providing viewer/fans with current features,match preview analysis,Technology update and health news etc. Newsaffairng is working on employing a large number of dedicated team of staff editors and freelance reporters to add to the few we have so that they can produce rich content around the world.Both editors and freelance are scattered over the continent with good knowledge of sport(football),Health and Technology. We cover a wider range of topics which have made our reader able to enjoy what we have to offer.
Contact us: Justnewsaffair@yahoo.com

Al Nassr deny all the fake news on the involvement of...