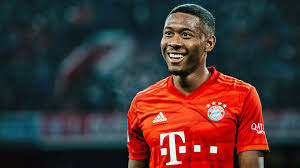 Current report gathered is saying that the respected Bayern Munich defender David Alaba have come out openly to state his condition if he must sign for Chelsea this summer transfer window.

It was noted that the defender is saying that he will join Chelsea at the end of the season if the Premier giant League giants agrees to pay him around £20million-a-year.

Also gathered from a respected media house report stating that the defender is resquesting for close to £400,000-a-week to move to the West London club from Bayern.

If the above condition is granted by the EPL club then he stand a better chance to be the highest-paid player at Stamford Bridge, with N’Golo Kante, the current top earner on around £295,000-a-week.

Based on club information the respected the 28-year-old is set to leave Bayern Munich on a free transfer this summer and join any club ready to meet the above condition.

Noted by football Analyst saying that his current deal with Bayern Munich will expire at the end of June 2021 and he will be willing to move if certain condition is met.

Information from the the transfer market states that Chelsea and Real Madrid are among interested clubs that want to secure the service of Alaba and club information gathered that the Austrian recently turned down a £200,000 a week contract extension to remain at the Champions League holders. Bayern.

newsaffairng - March 13, 2022
0
Load more
Newsaffairng is a joint venture of great people of like mind and friends who see news in their area as important as the food they eat. The story of our love for infrmation and News was mainly for those who believed that there is no news that is complete until is ready by all.Packed with statistics,fact,figures and insight knowledge of some area(sport,Health & Tech) needed by people to get awareness we hope to provide our reader/viewers something different from the usual. It was designed,developed and maintained with one thing in mind which is to bring to his viewers a first class information on areas of Sport,Health,Technology and general news from the horses month. Newsaffairng is born to provide exclusive player and manager interviews of football and providing viewer/fans with current features,match preview analysis,Technology update and health news etc. Newsaffairng is working on employing a large number of dedicated team of staff editors and freelance reporters to add to the few we have so that they can produce rich content around the world.Both editors and freelance are scattered over the continent with good knowledge of sport(football),Health and Technology. We cover a wider range of topics which have made our reader able to enjoy what we have to offer.
Contact us: Justnewsaffair@yahoo.com

Arsenal ready to pay as much as £50million for transfer Of...

Juventus Star Striker Morata says “In January I could move to...