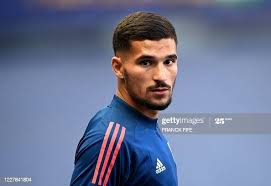 The Gunner have been advised by one of their respected Legend Ian Wright the need for them to bid for the £50m-rated Ghanaian playmaker Aouar.

It must be noted that the respected Ghanaian has already made a good impression in the defensive midfield role which he always feature in during the course of play and  Arsenal Legend believes the Gunners also need to bring in Aouar to add to the midfield role of the Team.

Based on Arsenal legend opinion and finding which he stressed that his former club should make a fresh move for Houssem Aouar when the transfer window reopens in January next year.

Club report shows that the Gunners included in their plan to sign both Aouar and Thomas Partey in the just concluded  summer transfer window but only succeed in getting one of them.

Atletico Madrid playmaker Partey joined the north London giants on a deadline day transfer from Spanish Giant Atletico Madrid in which Arsenal where able to meet up with the £45m release clause in his previous club contract.

Quoting the respected Gunner Legend saying that “They still need more, he’s not the main one and that’s why Arsenal went for Houssem Aouar as well, I’m hoping they can still get Aouar at some stage but Partey is a massive improvement on what Arsenal have got,” He told Premier League reporter.

Report shows that the Gunners failed with an initial bid of £35m tabled for Aouar this summer but the fact remains to be seen whether Arsenal are willing to meet Les Gones’ £50m price tag which was placed on the player.

Gunner’s Boss Mikel Arteta’s Team suffered 1-0 defeat to Leicester City at the Emirates Stadium which was a blow to Arsenal last week.

Football Scout who monitored Aouar in the match where he starred for Lyon in their 4-1 thrashing of French team Monaco noted that he was able to provided a lovely assist and a goal credited to him in penalty.

newsaffairng - October 27, 2021
0
Load more
Newsaffairng is a joint venture of great people of like mind and friends who see news in their area as important as the food they eat. The story of our love for infrmation and News was mainly for those who believed that there is no news that is complete until is ready by all.Packed with statistics,fact,figures and insight knowledge of some area(sport,Health & Tech) needed by people to get awareness we hope to provide our reader/viewers something different from the usual. It was designed,developed and maintained with one thing in mind which is to bring to his viewers a first class information on areas of Sport,Health,Technology and general news from the horses month. Newsaffairng is born to provide exclusive player and manager interviews of football and providing viewer/fans with current features,match preview analysis,Technology update and health news etc. Newsaffairng is working on employing a large number of dedicated team of staff editors and freelance reporters to add to the few we have so that they can produce rich content around the world.Both editors and freelance are scattered over the continent with good knowledge of sport(football),Health and Technology. We cover a wider range of topics which have made our reader able to enjoy what we have to offer.
Contact us: Justnewsaffair@yahoo.com