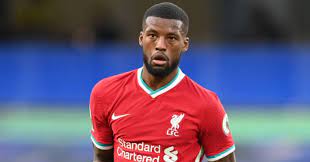 It was recently noted that Netherlands midfielder Georginio Wijnaldum have finally agreed to join Spanish Barcelona when his contract with Liverpool expires at the end of June as he is not willing to continue with the premier league club again.

Although the Dutchman midfielder have been with the premier league giant for nearly five seasons and he is now willing to pursue a fresh challenge by join the Spanish giant Barcelona.

Report shows that the Liverpool man had been in contract talks with the Merseyside giants, but no breakthrough was made due to a disagreement over personal terms between the two parties.

Recent report as confirmed by us shows that the Liverpool midfielder will be plying his trade for the Blaugrana next season after agreeing a pre-contract deal with the Spanish giant.

Although the former Newcastle United man is set to join and be reunited with manager Ronald Koeman, who was previously his national team head coach for his country.

With the coming of the Liverpool man and with Barcelona currently four points behind leaders Atletico Madrid with the believe that Barcelona might come closer before the season expires.

Inside sources shows that Koeman’s job is reportedly in a secure state for another year regardless of the club’s fortunes for the rest of the season which is about to end.