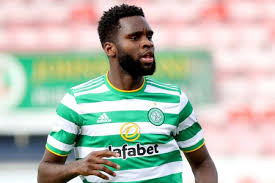 Recent report as monitored by our news group shows that Leicester City have been linked with a move for the striker over the last year with Brendan Rodgers likely to strengthen his attacking options in the coming summer as the need be.

With the above situation in the mind of Leicester City Boss who is set to win the race for Celtic striker Odsonne Edouard’s signature this summer and these will help help strengthen his attack.

The 23-year-old striker according to media houses have spoken saying that he wants to be reunited with his former boss Brendan Rodgers, who bought him from Paris Saint-Germain while he was in charge at Celtic Park for £9million after a successful season-long loan spell in 2017 for the club.

Although there are claims that Foxes boss Rodgers is close to a deal to bring the Frenchman playmaker to the King Power Stadium for a fee believed to be around £15million according to inhouse report.

Edouard will have 12 months left on his contract this summer and that, as well as a sell-on fee of around 40 per cent owed to PSG, has driven down the price, says the report.

Based on club report showing that the 6ft 2inch tall centre-forward have 21 goals already credited to him this season and he is seen as a good replacement for 34-year-old Jamie Vardy in the future.

It must be noted that at one point in time it was believed that Celtic are hoping to receive as much as £40m for the striker who has a combined goal of 83 in four seasons with the club.

newsaffairng - July 27, 2022
0
Load more
Newsaffairng is a joint venture of great people of like mind and friends who see news in their area as important as the food they eat. The story of our love for infrmation and News was mainly for those who believed that there is no news that is complete until is ready by all.Packed with statistics,fact,figures and insight knowledge of some area(sport,Health & Tech) needed by people to get awareness we hope to provide our reader/viewers something different from the usual. It was designed,developed and maintained with one thing in mind which is to bring to his viewers a first class information on areas of Sport,Health,Technology and general news from the horses month. Newsaffairng is born to provide exclusive player and manager interviews of football and providing viewer/fans with current features,match preview analysis,Technology update and health news etc. Newsaffairng is working on employing a large number of dedicated team of staff editors and freelance reporters to add to the few we have so that they can produce rich content around the world.Both editors and freelance are scattered over the continent with good knowledge of sport(football),Health and Technology. We cover a wider range of topics which have made our reader able to enjoy what we have to offer.
Contact us: Justnewsaffair@yahoo.com