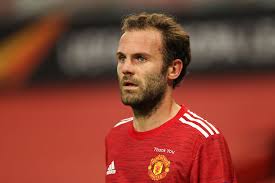 Recent report have shown how Manchester United manager Ole Gunnar Solskjaer has finally reacted to a recent reports linking the movement of Juan Mata to the exist door.

Football scout where also saying that the like of the Old Lady Juventus, AS Roma and Inter Milan are all monitoring the situation at United with reference to Juan Mata.

Based on club report showing that Mata’s contract with Man United will expire at the end of the season with no plan by United to offer the player a new contract.

But it must also be noted that United also have the option of extending his contract by a further 12 months if the feel is worth it.

Although it was observed on Wednesday that United Boss Solskjaer said during an interview ahead of Man United’s Europa League last-32 second leg tie with Real Sociedad saying that he was not surprised that Mata is being linked with a move away from the club and with major clubs showing interest on the player.

Quoting the United Boss in his own word saying ” The Spaniard is an outstanding footballer and a fantastic professional.

“I’m not surprised that teams are interested in him [Mata],”

“One, he’s a very good footballer, two, he’s a fantastic professional and human being. When the contracts are running towards the end, there will be interest. I’m sure Juan has been able to speak to other clubs if he wants to.

“I keep in touch with him all the time anyway. We have a good dialogue.”.

Finally major clubs are still monitoring the situation at United as the day progresses.

Just the Reason why Arsenal walked away from signing Mykhailo Mudryk

La Liga side Real Valladolid are closing in on deal to...