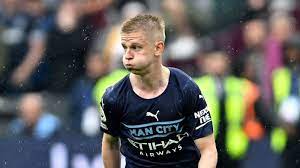 Report have shown that the Gunner are set to sign Manchester City defender Oleksandr Zinchenko after agreeing personal terms with the player.

Although it was noted that the Gunners agreed a £30m fee with the Cityzens on Friday and they have now proceeded to finalise a four-year contract with the established player.

It must be noted that the Ukraine international is now scheduled to undergo his medical and David Ornstein claims that it could happen this week.

Zinchenko has been on the Gunners’ radar since the summer of 2020. Arteta previously failed to convince the Cityzens to sell him.

He has finally got the chance to reunite with the 25-year-old. Arteta knows him well from his time as City’s assistant manager.

Zinchenko could link up with Arsenal in their US pre-season tour, considering he is in the country with Pep Guardiola’s side.

Arsenal recently played Everton in Maryland. They are now scheduled to face Orlando City and Chelsea in Florida this week.

Zinchenko should provide quality competition to Kieran Tierney at left-back next term, but could also play in the centre of the park.