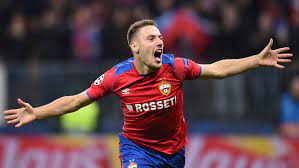 Moscow on a permanent deal that will cost the London side €30 million plus add-ons.

West Ham United have confirmed the signing of Nikola Vlasic from CSKA Moscow on a permanent deal.
The Croatian international featured heavily on the Hammers’ list of targets, and the Premier League side have
acquired the attacking midfielder for a fee of €30 million-plus add ons.

David Moyes wanted to sign an attacking midfielder on a priority basis in this window. Having chased Jesse Lingard all summer,
time was running out for the London club to bring in a suitable player. Nikola Vlasic had emerged on their radar a few weeks back,
and the Hammers have pursued the Croatian international since.

A move has now been confirmed by the Premier League side, who are set to pay CSKA Moscow €30 million in
transfer fees, and an additional €8 million in add-ons depending on how the player meets certain performance objectives, as
claimed by Fabrizio Romano. Vlasic has signed a five-year contract at the club including a one-year option until 2026.

The Croatian has evolved since moving to CSKA Moscow, scoring 25 goals in the last two seasons in Russia. He returns to the familiar territory of the Premier League
having played for Everton before. Vlasic had an underwhelming two-year period at the Toffees, playing sporadically.

newsaffairng - September 15, 2021
0
Load more
Newsaffairng is a joint venture of great people of like mind and friends who see news in their area as important as the food they eat. The story of our love for infrmation and News was mainly for those who believed that there is no news that is complete until is ready by all.Packed with statistics,fact,figures and insight knowledge of some area(sport,Health & Tech) needed by people to get awareness we hope to provide our reader/viewers something different from the usual. It was designed,developed and maintained with one thing in mind which is to bring to his viewers a first class information on areas of Sport,Health,Technology and general news from the horses month. Newsaffairng is born to provide exclusive player and manager interviews of football and providing viewer/fans with current features,match preview analysis,Technology update and health news etc. Newsaffairng is working on employing a large number of dedicated team of staff editors and freelance reporters to add to the few we have so that they can produce rich content around the world.Both editors and freelance are scattered over the continent with good knowledge of sport(football),Health and Technology. We cover a wider range of topics which have made our reader able to enjoy what we have to offer.
Contact us: Justnewsaffair@yahoo.com