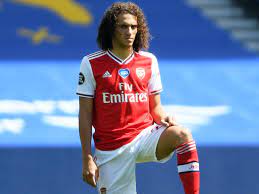 Report from our EPL reporter shows that Arsenal midfielder Matteo Guendouzi is reportedly closing in on a permanent move away from the club this summer.

Statistics show that the 22-year-old’s most recent appearance for Arsenal came in their 2-1 defeat to Brighton & Hove Albion in June 2020, where he was involved in a confrontation with Neal Maupay after the full-time whistle and was not selected for the rest of the season for now.

Believe show that the Gunners chiefs is believed to have been concerned about Guendouzi’s discipline and these has lead to him been shipped out on loan to Hertha Berlin for the 2020-21 season, where he has impressed with two goals and three assists from 24 Bundesliga appearances.

Although Guendouzi is due to return to Arsenal at the end of his loan spell in Germany, but he is thought to be one of several players on the chopping block as Mikel Arteta seeks to raise funds for a summer overhaul which he consider some players as excess to requirement.

It must also be noted that a permanent transfer to Hertha has been mooted and also observed that Marseille are leading the race for the France Under-21 international’s signature.

Inhouse sources states that Guendouzi’s existing deal at Arsenal expires in 2022, and it seems unlikely that he will be offered an extension, meaning that the Gunners are expected to recoup a fee for him this summer rather than let him walk away for free next year.

newsaffairng - July 26, 2021
0
Load more
Newsaffairng is a joint venture of great people of like mind and friends who see news in their area as important as the food they eat. The story of our love for infrmation and News was mainly for those who believed that there is no news that is complete until is ready by all.Packed with statistics,fact,figures and insight knowledge of some area(sport,Health & Tech) needed by people to get awareness we hope to provide our reader/viewers something different from the usual. It was designed,developed and maintained with one thing in mind which is to bring to his viewers a first class information on areas of Sport,Health,Technology and general news from the horses month. Newsaffairng is born to provide exclusive player and manager interviews of football and providing viewer/fans with current features,match preview analysis,Technology update and health news etc. Newsaffairng is working on employing a large number of dedicated team of staff editors and freelance reporters to add to the few we have so that they can produce rich content around the world.Both editors and freelance are scattered over the continent with good knowledge of sport(football),Health and Technology. We cover a wider range of topics which have made our reader able to enjoy what we have to offer.
Contact us: Justnewsaffair@yahoo.com

Spanish Giant Prepared to keep hold of Ousmane Dembele as they...