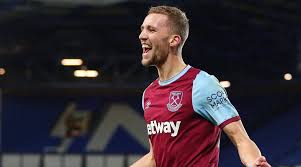 It was noted that the 26-year-old has been in an impressive form for Westham during the 2020-21 campaign with eight goals in 26 Premier League appearances all accredited to him.

Based on club report showing that Soucek only joined David Moyes’s side on a permanent deal from Slavia Prague last summer and has a contract at the London Stadium until June 2024 with all performance attracting interest from other big players in the industry.

Report is showing that the Spanish giant Barca are keen on bringing the Czech Republic international to Camp Nou having been impressed by his performances since arriving in the Premier League two season ago.

Although based on inhouse information showing that the Catalan giants are willing to include either Miralem Pjanic or Martin Braithwaite as a makeweight in a move as the club are struggling with the financial impact of the coronavirus outbreak which is affecting all the club in Europe.

EPL giant like Manchester United are also said to be admirers of the versatile midfielder who has been able to prove himself in Westham.

newsaffairng - June 30, 2021
0
Load more
Newsaffairng is a joint venture of great people of like mind and friends who see news in their area as important as the food they eat. The story of our love for infrmation and News was mainly for those who believed that there is no news that is complete until is ready by all.Packed with statistics,fact,figures and insight knowledge of some area(sport,Health & Tech) needed by people to get awareness we hope to provide our reader/viewers something different from the usual. It was designed,developed and maintained with one thing in mind which is to bring to his viewers a first class information on areas of Sport,Health,Technology and general news from the horses month. Newsaffairng is born to provide exclusive player and manager interviews of football and providing viewer/fans with current features,match preview analysis,Technology update and health news etc. Newsaffairng is working on employing a large number of dedicated team of staff editors and freelance reporters to add to the few we have so that they can produce rich content around the world.Both editors and freelance are scattered over the continent with good knowledge of sport(football),Health and Technology. We cover a wider range of topics which have made our reader able to enjoy what we have to offer.
Contact us: Justnewsaffair@yahoo.com