Okorocha vs Uzodimma: I stand with Imo people

Pope Francis prays for ‘victims of war’ in Iraq’s Mosul

Lingering petrol price and the economy

We need to know who owns the land 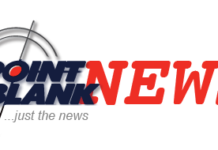