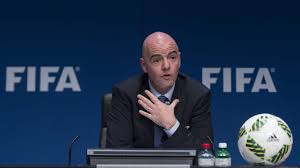 Report from FIFA President Gianni Infantino recently after his visit to Morocco by thanking his highness, King Mohammed VI the Moroccan government and Moroccan Football Association (FMRF) for their commitment and continuous support for the development of football in the country and in African As a whole.

Quoting Infantino in his own word saying “I would like to thank everyone who has accompanied us on this visit especially his majesty King Mohammed VI, for his enoumous interest and passion for the game football and for his support and ambition to grow the sport even further in Morocco as a whole.

The FIFA Present went furthere saying “Without him, and without the support of both the government and everyone at the federation, this development would not be possible in these area. We were able to discuss openly and to identify concretely the projects for the future development of not only Moroccan football”.

According to report from FIFA official who specifically said African football and football across the world especially as Morocco plays a pivotal role in the global game and also the Women’s football progress was also highlighted in Morocco meetings.

It was also noted by FIFA President in Rabat saying that the opportunity to meet CAF presidential candidate Jacques Anouma, who is also visiting the country at that time was also reconsidered by all involved.

Infantino stated in his own word saying “I was very happy to have the chance to discuss with Jacques Anouma his plans for the future of African football and how can FIFA, CAF and the African member associations work together, hand in hand, to bring African football to the very top level it deserves to be,”

Although it was also observed that in recent days especially during Infantino’s trip to several African countries, the FIFA President was able to met with 4 candidates for the upcoming CAF presidential elections which where namely Jacques Anouma, Patrice Motsepe, Augustin Senghor and Ahmed Yahya all contesting for the post.

newsaffairng - July 15, 2022
0
Load more
Newsaffairng is a joint venture of great people of like mind and friends who see news in their area as important as the food they eat. The story of our love for infrmation and News was mainly for those who believed that there is no news that is complete until is ready by all.Packed with statistics,fact,figures and insight knowledge of some area(sport,Health & Tech) needed by people to get awareness we hope to provide our reader/viewers something different from the usual. It was designed,developed and maintained with one thing in mind which is to bring to his viewers a first class information on areas of Sport,Health,Technology and general news from the horses month. Newsaffairng is born to provide exclusive player and manager interviews of football and providing viewer/fans with current features,match preview analysis,Technology update and health news etc. Newsaffairng is working on employing a large number of dedicated team of staff editors and freelance reporters to add to the few we have so that they can produce rich content around the world.Both editors and freelance are scattered over the continent with good knowledge of sport(football),Health and Technology. We cover a wider range of topics which have made our reader able to enjoy what we have to offer.
Contact us: Justnewsaffair@yahoo.com

The Gunners Considering offloading Alexandre Lacazette in the coming summer.