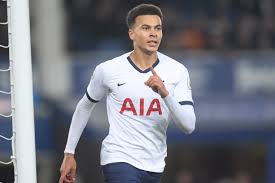 With the transfer still on and with most player willing to move to a better club where they will get good playing time on the game but Tottenham Hotspur midfielder Dele Alli is reportedly pushing to leave the Premier League club before the end of January window as interest have been established by his former Boss.

It was observed that the 24-year-old has endured a frustrating campaign in North London club after making just five starts and five substitute appearances in all competitions played by the club.

It was noted that despite Spurs’ struggles against Fulham in midweek, the England international and midfielder was left out of the squad to face Sheffield United on Sunday.

Based on his On his official Twitter account it was stated that the Italian journalist Fabrizio Romano says that Alli is eager to link up with former boss Mauricio Pochettino at Paris Saint-Germain where he feels will get good playing time.

The sport respected Journalist Romano also added that Spurs officials remained unconvinced that they should part ways with the playmaker who is regarded as a valuable squad member as the club targets silverware in four different competitions they are involved.

It must be noted that such exist will depend on whether Spurs are able to negotiate a reunion with Inter Milan midfielder Christian Eriksen who could cover up for the missing rib.

newsaffairng - August 23, 2022
0
Load more
Newsaffairng is a joint venture of great people of like mind and friends who see news in their area as important as the food they eat. The story of our love for infrmation and News was mainly for those who believed that there is no news that is complete until is ready by all.Packed with statistics,fact,figures and insight knowledge of some area(sport,Health & Tech) needed by people to get awareness we hope to provide our reader/viewers something different from the usual. It was designed,developed and maintained with one thing in mind which is to bring to his viewers a first class information on areas of Sport,Health,Technology and general news from the horses month. Newsaffairng is born to provide exclusive player and manager interviews of football and providing viewer/fans with current features,match preview analysis,Technology update and health news etc. Newsaffairng is working on employing a large number of dedicated team of staff editors and freelance reporters to add to the few we have so that they can produce rich content around the world.Both editors and freelance are scattered over the continent with good knowledge of sport(football),Health and Technology. We cover a wider range of topics which have made our reader able to enjoy what we have to offer.
Contact us: Justnewsaffair@yahoo.com

Fernandinho approached by 3 Brazilian clubs as he plans to leave...