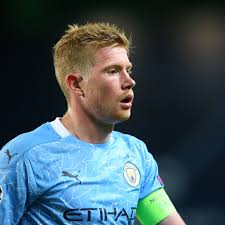 Current indication is showing that top premier league club Manchester City are reportedly ready to make Raheem Sterling and Kevin De Bruyne the top-paid players in the English Premier League in order to tie the pair down to new deals and extend their stay with the club for more years.

Although it must be noted that based on the individual performance of the two player which has lead to the Manchester City management looking beyond their current current and ready to make them the highest paid player in the League if they both agree with the new contract term in process.

Based on inhouse information saying that City management have been in talks with both men over fresh terms for over a year now irrespective of their current contract still running with the club till 2023.

Quoting a media report saying that in order to bring an end to the discussions, City will offer the both player a weekly £400,000 deals.

Based on current research it was observed that Manchester United goalkeeper David de Gea is currently the highest paid Premier League’s player and goalkeeper with a deal worth £375,000 a week.

Football record states that the 58-cap England international Sterling’s has been in discussion with City management for over r 18 months and a source has confirmed to football reporter that City are more than hopeful that he will put pen to paper on a deal worth a whopping £400,000-a-week based on the new contract.

It’s a title that City hope Sterling will share with De Bruyne, who has been in talks over his own £400,000-a-week extension for over a year.

It must be noted tat the 29-year-old Belgian Kevin De Bruyne was very close o signing a new deal earlier this year but saw negotiations stall when his agent, Patrick de Koster was arrested by Belgian authorities on suspicion of financial mismanagement .

But one thing must be noted here that same report indicates that talks are still ongoing between City and boss Pep Guardiola over extending his stay beyond the end of the campaign but with the look of things now which looks uncertain for the Tactician.

With all these setback it shows that De Bruyne remains ready to sign an extension as he is happy with life at the Etihad Stadium for now.

Although the future of City Manager Pep Guardiola has also been a subject of review as the Spaniard’s current deal is set to expire at the end of the season and with the look of things there is no public indication that an extension is forthcoming but both Sterling and De Bruyne have been left satisfied with City’s response to their questions over the boss’ future for now.

newsaffairng - December 9, 2022
0
Load more
Newsaffairng is a joint venture of great people of like mind and friends who see news in their area as important as the food they eat. The story of our love for infrmation and News was mainly for those who believed that there is no news that is complete until is ready by all.Packed with statistics,fact,figures and insight knowledge of some area(sport,Health & Tech) needed by people to get awareness we hope to provide our reader/viewers something different from the usual. It was designed,developed and maintained with one thing in mind which is to bring to his viewers a first class information on areas of Sport,Health,Technology and general news from the horses month. Newsaffairng is born to provide exclusive player and manager interviews of football and providing viewer/fans with current features,match preview analysis,Technology update and health news etc. Newsaffairng is working on employing a large number of dedicated team of staff editors and freelance reporters to add to the few we have so that they can produce rich content around the world.Both editors and freelance are scattered over the continent with good knowledge of sport(football),Health and Technology. We cover a wider range of topics which have made our reader able to enjoy what we have to offer.
Contact us: Justnewsaffair@yahoo.com