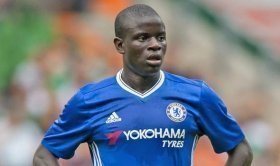 With an on growing gap between Chelsea’s N’Golo Kante and Chelsea Boss Frank Lampard with might lead to a move to Spanish Giant Real Madrid next season by the French playnmaker.

Although the French playmaker and Chelsea midfielder N’Golo Kante is looking at considering a move to Real Madrid amid a frosty relationship with manager Frank Lampard according to recent report.

It must be noted that the World Cup-winning Frenchman has started all four current Chelsea’s Premier League games in the 2020-21 campaign, irrespective of seeing his future at Chelsea called into question on a couple of occasions during the last season.

Based on football analyst view saying that the Chelsea man Kante did not secure an exit from Stamford Bridge in the most recent transfer window because he sees his future away from the English capital if any move must be established by him.

Based on similar media report view also having it that Kante’s relationship with Lampard is not really friendly and the 29-year-old might be open to an exit from the Blues with the Bernabeu being his dream destination if he must move.

Inhouse report claimed that Kante’s standing problem with Lampard took a hit after the Chelsea manager refused to allow the midfielder to miss training for a friend’s wedding which has lead to the France international seeking a way out as early as January.

Based on club report it was noted that Kante’s current deal at Stamford Bridge is set to expire in 2023 and report has shown that Inter Milan have also been previously credited with an interest in the two-time Premier League winner and French world cup winner.

newsaffairng - March 21, 2022
0
Load more
Newsaffairng is a joint venture of great people of like mind and friends who see news in their area as important as the food they eat. The story of our love for infrmation and News was mainly for those who believed that there is no news that is complete until is ready by all.Packed with statistics,fact,figures and insight knowledge of some area(sport,Health & Tech) needed by people to get awareness we hope to provide our reader/viewers something different from the usual. It was designed,developed and maintained with one thing in mind which is to bring to his viewers a first class information on areas of Sport,Health,Technology and general news from the horses month. Newsaffairng is born to provide exclusive player and manager interviews of football and providing viewer/fans with current features,match preview analysis,Technology update and health news etc. Newsaffairng is working on employing a large number of dedicated team of staff editors and freelance reporters to add to the few we have so that they can produce rich content around the world.Both editors and freelance are scattered over the continent with good knowledge of sport(football),Health and Technology. We cover a wider range of topics which have made our reader able to enjoy what we have to offer.
Contact us: Justnewsaffair@yahoo.com