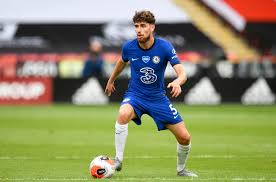 Report from the Blues saying that Chelsea midfielder Jorginho is reportedly in a better position for a new deal at Stamford Bridge after accepting to stay or remain at the club during the transfer window which was seen as  a way of leaving the club.

It was observed that the Italy international was considering a move to London rivals Arsenal in the summer months but later Jorginho ultimately changed his mind to remained at Stamford Bridge for the 2020-21 campaign and also pledge his loyalty to the club.

Report show that the Loyal  28-year-old will be offered improved terms by Blues owing to his loyalty to the club and club report shows that Jorginho’s current deal with Frank Lampard’s side set to expire in 2023 season.

Based on club record saying that the established midfielder has turned out 102 times in blue since his coming from Napoli in 2018 with 12 goals credited to him including three penalties in the current Premier League season.

Although the Blues return to top-flight action with a home fixture against Southampton on Saturday following the football international break where Jorginho has already played  full 90 minutes for his home country in a goalless draw.

newsaffairng - July 26, 2022
0
Load more
Newsaffairng is a joint venture of great people of like mind and friends who see news in their area as important as the food they eat. The story of our love for infrmation and News was mainly for those who believed that there is no news that is complete until is ready by all.Packed with statistics,fact,figures and insight knowledge of some area(sport,Health & Tech) needed by people to get awareness we hope to provide our reader/viewers something different from the usual. It was designed,developed and maintained with one thing in mind which is to bring to his viewers a first class information on areas of Sport,Health,Technology and general news from the horses month. Newsaffairng is born to provide exclusive player and manager interviews of football and providing viewer/fans with current features,match preview analysis,Technology update and health news etc. Newsaffairng is working on employing a large number of dedicated team of staff editors and freelance reporters to add to the few we have so that they can produce rich content around the world.Both editors and freelance are scattered over the continent with good knowledge of sport(football),Health and Technology. We cover a wider range of topics which have made our reader able to enjoy what we have to offer.
Contact us: Justnewsaffair@yahoo.com

Ousmane Dembele says he wants to stay at Barcelona despite PSG...