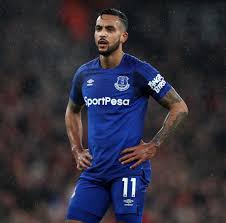 Many Media houses are also agreeing with us that former Arsenal winger is no more on the radar of West Ham.

Although it was noted that the former Arsenal man could leave Everton on loan these summer before the  transfer deadline day if the deal must pass.

According to report from Southampton who has made enquires about signing the 31-year-old, but West Ham are no longer in the running for the England international’s signature and they are ready to allow Southampton have their way.

With alot of report and news coming in these Deadline day ,with recently report claiming that West Ham have made contact with Everton over signing the Englishman on a loan deal for the season and so on

Based on football analyst view saying that former Arsenal winger Walcott is a good player, but the Everton man has failed to make a huge impact at Everton with the coming of their experienced Boss.

Although With Everton having signed James Rodriguez and Allan among other players this summer it is believed that it will be extremely hard for the Englishman to play regularly for the Merseyside club this season which may lead to him sitting at the packing order.

We analyst also believe that a loan move away from the Toffees would make sense for the struggling 31 year old winger who still have a lot to offer the football world and can be a very good signing for a club who are aiming for the European places in the Premier League table this season with onething in mind he might pick his form if allow to go on loan.

newsaffairng - March 13, 2022
0
Load more
Newsaffairng is a joint venture of great people of like mind and friends who see news in their area as important as the food they eat. The story of our love for infrmation and News was mainly for those who believed that there is no news that is complete until is ready by all.Packed with statistics,fact,figures and insight knowledge of some area(sport,Health & Tech) needed by people to get awareness we hope to provide our reader/viewers something different from the usual. It was designed,developed and maintained with one thing in mind which is to bring to his viewers a first class information on areas of Sport,Health,Technology and general news from the horses month. Newsaffairng is born to provide exclusive player and manager interviews of football and providing viewer/fans with current features,match preview analysis,Technology update and health news etc. Newsaffairng is working on employing a large number of dedicated team of staff editors and freelance reporters to add to the few we have so that they can produce rich content around the world.Both editors and freelance are scattered over the continent with good knowledge of sport(football),Health and Technology. We cover a wider range of topics which have made our reader able to enjoy what we have to offer.
Contact us: Justnewsaffair@yahoo.com

Don’t you think Tottenham is making too many mistakes present