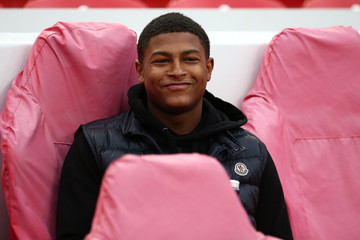 As transfer window moves to an end next week it was observed that Sheffield United have secured a major signing of Rhian Brewster from Liverpool as the talented forward penning a contract with the Blades until 2025.

It was noted that Sheff Utd have paid a reported £23.5 million to enable the striker who is seen as one of England’s best young players to move from the Red to Sheffield.

Based on football analyst view which they are saying the deal comes as a surprise to many scout considering Liverpool manager Jurgen Klopp who had considered Brewster as one of his best young players he feel like keeping.

Quoting  Chris Wilder who is the Boss of Sheff Utd telling the press: “He has been our number one target. At the top of the pitch we have one of the country’s hottest properties from Liverpool and for him to sign permanently here is fantastic for everyone concerned.

Further saying “He’s a natural goal scorer. He finishes from any aspect, whether it is in the air or whether it’s spectacular goals, free-kicks or off his shin – he has a lovely habit of scoring goals, which is crucial in the Premier League.”

Although it was understood that Liverpool have secured a buy back clause in the deal for Brewster for the next three seasons, as well as a 15 percent sell-on clause should United sell the player elsewhere as agreed by both parties.

Before the deal was concluded Brewster told sport reporters: “I am ready to come in and show everyone what I’ve got. It is a team that creates a lot of chances for striker, the three at the back, overlapping, they get crosses into the box and that’s my game – being in the box, finding space and one- and two-touch finishes all is need to make the game good.

“That’s what I am going to try and do, and try and score goals for my new team Sheffield United.”

One thing must be noted is that Rhian Brewster is ready to show what he have on board.

Wilson and Marko Grujic heading to the exist door as Liverpool...

David Beckham : I want Sergio Ramos to come to Inter...