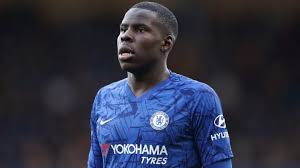 With interest coming from a premier league club, Chelsea are prepared to consider the sale of Kurt Zouma this summer amid the reported interest from Everton.
It was noted that the Frenchman spent the 2018/2019 campaign on loan with the Toffees where he was one of their leading player and these has lead to them trying to see if the player will move to them.

With Everton trying to re-sign him permanently last summer based on his loan performance which was was blocked by Frank Lampard.

Since Zouma has fallen down the pecking order for the center-back role and his chances of heading to the exist door is coming closer as interest is showing again from Everton.

The Frenchman who is currently in the parking order with the likes of Thiago Silva, Andreas Christensen and Fikayo Tomori in the selection order for the league duties ahead of him ,it shows that a move can be established.

With the Blues already made seven major signings this summer and they have already spent more than £220m in these season transfer market and also with a valuation of £36m placed on Zouma it remains to be seen whether the Toffees will meet the price tag before the window will close.

Although It was  noted that West Ham United midfielder Declan Rice is a major priority target for Lampard before the transfer windows ends.

newsaffairng - September 11, 2021
0
Load more
Newsaffairng is a joint venture of great people of like mind and friends who see news in their area as important as the food they eat. The story of our love for infrmation and News was mainly for those who believed that there is no news that is complete until is ready by all.Packed with statistics,fact,figures and insight knowledge of some area(sport,Health & Tech) needed by people to get awareness we hope to provide our reader/viewers something different from the usual. It was designed,developed and maintained with one thing in mind which is to bring to his viewers a first class information on areas of Sport,Health,Technology and general news from the horses month. Newsaffairng is born to provide exclusive player and manager interviews of football and providing viewer/fans with current features,match preview analysis,Technology update and health news etc. Newsaffairng is working on employing a large number of dedicated team of staff editors and freelance reporters to add to the few we have so that they can produce rich content around the world.Both editors and freelance are scattered over the continent with good knowledge of sport(football),Health and Technology. We cover a wider range of topics which have made our reader able to enjoy what we have to offer.
Contact us: Justnewsaffair@yahoo.com