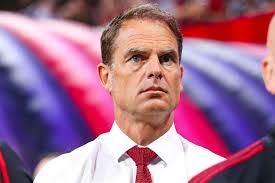 Report with great joy in the eyes of most football reporters,scout and analyst saying that Frank de Boer has been appointed as the Netherlands’ new coach, the Royal Dutch Football Federation (KNVB).

History have it that the third-most capped Dutch player of all time, De Boer replaces Ronald Koeman who resigned earlier this year to take on the affair of Spanish Giant Barcelona.

It must be noted that the 50-year-old former international will be at the helm of the Oranje until the World Cup in 2022 as quoted by Royal Dutch Football Federation.

Based on is appointment it was noted that De Boer is expected to start immediately on the job and also saying he “will be on the bench in the upcoming practice match against Mexico and the Nations League duels with Bosnia-Herzegovina and Italy” as noted.

Based on club statistics saying that De Boer is a talented left-footed defender while playing for the Oranje between 1990 and 2004, has had a mixed career as a coach and also as a good player.

Prior to is appointment it was noted that he first took up coaching at Amsterdam powerhouse Ajax in 2007 and assisted Bert van Marwijk, together with retired player Phillip Cocu to help the Dutch team reach a final in the 2010 World Cup in South Africa although where beaten by Spain.

It was also observed as added to his football history that later that year he took over as caretaker manager at Ajax and guided them to become Eredivisie champions for the 2010-11 season as credited to him.

Other story also continued saying that in 2014 De Boer won his fourth successive Eredivisie title with Ajax as a coach and also as the first manager ever to achieve this in the Dutch league.

He later resigned from Ajax in 2016 and signed a three-year contract at Inter Milan in August that same year as a way of advancing his career but was sacked after only 85 days at the helm with a series of losses attached to his start.

Just not far from that saying in June 2017 De Boer was also announced as the new manager of a Premier League cub called Crystal Palace but was sacked 10 weeks later when Palace lost their first four league matches in that season without scoring a single goal at that time.

He further moved to USA where he was later announced as new coach at Atlanta United in December 2018 and in his first season the eastern team won the US Open and the Campeones Cup and played in the Eastern Conference final as well.

It was also noted that the Dutchman called De Boer and the club however parted ways in July after another set of losses at that season.

newsaffairng - March 24, 2022
0
Load more
Newsaffairng is a joint venture of great people of like mind and friends who see news in their area as important as the food they eat. The story of our love for infrmation and News was mainly for those who believed that there is no news that is complete until is ready by all.Packed with statistics,fact,figures and insight knowledge of some area(sport,Health & Tech) needed by people to get awareness we hope to provide our reader/viewers something different from the usual. It was designed,developed and maintained with one thing in mind which is to bring to his viewers a first class information on areas of Sport,Health,Technology and general news from the horses month. Newsaffairng is born to provide exclusive player and manager interviews of football and providing viewer/fans with current features,match preview analysis,Technology update and health news etc. Newsaffairng is working on employing a large number of dedicated team of staff editors and freelance reporters to add to the few we have so that they can produce rich content around the world.Both editors and freelance are scattered over the continent with good knowledge of sport(football),Health and Technology. We cover a wider range of topics which have made our reader able to enjoy what we have to offer.
Contact us: Justnewsaffair@yahoo.com