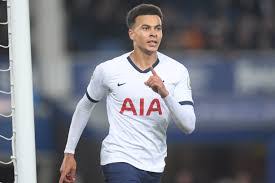 Tottenham Tactician and boss Jose Mourinho expects Dele Alli to stood his ground and earn his place in the current squad but with the transfer window currently coming to an end next month and with Jose confirming he is in the squad for this week’s Europa League fixture.

Although it must be noted that England midfielder Dele, who has been left out of the past two games by Jose Morinho  with him  already been linked with a loan move to Paris Saint-Germain in recent days and report is saying that PSG might offer some amount to allow the English man transfer his service.

It was also be noted that Dele was include to be among the team that will travel to North Macedonia for the Europa League third-round qualifying clash against Shkendija on Thursday.

Although  after being subbed at half-time during the opening game of the season against Everton and it was also noted that Alli was not in the squad for the matches against Lokomotiv Plovdiv or Southampton.

With Spur Boss Jose already promising that his due to start against Leyton Orient in the League Cup on Tuesday before the match was called off following a coronavirus outbreak at the League Two club.

Football Analyst are saying that Alli’s inclusion in the squad for the Shkendija trip and also quoting Mourinho in his own word saying: “I always told that he will have his opportunities. I always told that it is no problem at all to have him and, like every other player, performances are important.

Although it was noted that Alli’s place in the Spurs team has been put under even more threat by the arrival of Gareth Bale on loan from Real Madrid for the rest of the season potentially to form an exciting front three alongside Harry Kane and Son Heung-min which might lead to Alli staying in the parking order.

Although Sport Fan already noted that Kane with Son together make up all the five of Tottenham’s goals in a 5-2 win at Southampton, to bounce back from a 1-0 home defeat to Everton.

newsaffairng - December 16, 2021
0
Load more
Newsaffairng is a joint venture of great people of like mind and friends who see news in their area as important as the food they eat. The story of our love for infrmation and News was mainly for those who believed that there is no news that is complete until is ready by all.Packed with statistics,fact,figures and insight knowledge of some area(sport,Health & Tech) needed by people to get awareness we hope to provide our reader/viewers something different from the usual. It was designed,developed and maintained with one thing in mind which is to bring to his viewers a first class information on areas of Sport,Health,Technology and general news from the horses month. Newsaffairng is born to provide exclusive player and manager interviews of football and providing viewer/fans with current features,match preview analysis,Technology update and health news etc. Newsaffairng is working on employing a large number of dedicated team of staff editors and freelance reporters to add to the few we have so that they can produce rich content around the world.Both editors and freelance are scattered over the continent with good knowledge of sport(football),Health and Technology. We cover a wider range of topics which have made our reader able to enjoy what we have to offer.
Contact us: Justnewsaffair@yahoo.com

Arsenal Ready To Pay For Borussia Dortmund attacker In A Deal...