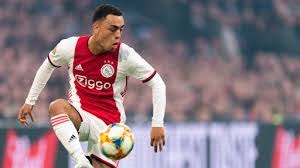 Currently with the coming of the new Barcelona Boss and the need to overhaul the team which has lead to the Spanish Giant looking at signing Ajax right-back Sergino Dest with Bayern Munich also showing interest on the said player.

The Spanish giants Barcelona are currently in the market for a right-back after selling Nelson Semedo to Wolves in a deal worth around £30m recently and they feel that there is a need to search for another option to manage  the position.

It was widely observed by Football Analyst that Barcelona had a loan bid for Norwich’s Max Aarons rejected by the Championship outfit and have now moved to hi-jack Bayern’s deal for Dest as a result of failed move for Max.

Although it was believed that as Semedo’s deal pushed through to and Barca Boss Ronald Koeman’s side are now allowed to sign a replacement and have made reportedly bid £18m for Dest already.

Far from near it was also observed that Bayern appear to have paid the price for not getting a deal done while Barcelona where unable to sign any players.

Football Analyst are saying that with Dest’s move to Barcelona  might end Aarons’ dreams of moving to Spain but could open up the door for a move to Bayern if a deal can be established.

Based on history it was observed that Koeman wanted Dest to pledge his future to the Netherlands during his time as manager of the country team but the 19-year-old opted instead to make his international debut for the United States as at that time.

Although it was now that the teenage right-back was only promoted into the Ajax first-team last season where he was able to make 20 league appearances before the season was curtailed early as a result of the dangerous coronavirus pandemic.

Dest, who has four assists registered to his name in the last league campaign with him just coming off the bench in each of Ajax’s first two league games of this season to show the stuff he is made of.

newsaffairng - June 24, 2021
0
Load more
Newsaffairng is a joint venture of great people of like mind and friends who see news in their area as important as the food they eat. The story of our love for infrmation and News was mainly for those who believed that there is no news that is complete until is ready by all.Packed with statistics,fact,figures and insight knowledge of some area(sport,Health & Tech) needed by people to get awareness we hope to provide our reader/viewers something different from the usual. It was designed,developed and maintained with one thing in mind which is to bring to his viewers a first class information on areas of Sport,Health,Technology and general news from the horses month. Newsaffairng is born to provide exclusive player and manager interviews of football and providing viewer/fans with current features,match preview analysis,Technology update and health news etc. Newsaffairng is working on employing a large number of dedicated team of staff editors and freelance reporters to add to the few we have so that they can produce rich content around the world.Both editors and freelance are scattered over the continent with good knowledge of sport(football),Health and Technology. We cover a wider range of topics which have made our reader able to enjoy what we have to offer.
Contact us: Justnewsaffair@yahoo.com

Lucas Torreira moving to Atletico Madrid on loan with option to...