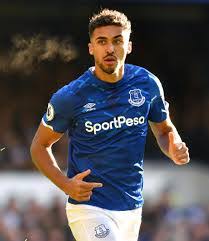 According to report stating that Manchester United are likely to made a surprise approach to sign Everton striker Dominic Calvert-Lewin during these transfer window as also reported by other media.

Although it was noted that the Red Devils are currently experiencing a quiet transfer window where they have only signed just one player in the form of Donny van de Beek and still looking at signing more before the windows expires.

Club report from United are saying that United are eyeing at least two more signings before the deadline next month and one of them could be focused on strengthening the attack of united which is seriously needed to enable push well in these new season.

Even similar report from other football media houses as confirmed by us is also of the fact that United were keen on landing Calvert-Lewin earlier this summer, but was considered too expensive when a price tag of £80m was placed on him.

Based on current season start saying that Calvert-Lewin have already have a sensational start with four goals from two outings and that includes a hat-trick against WestBrom as noted.

It must be noted that at the beginning of these this year,  Everton playmaker signed a new long-term deal with his team till the summer of 2025 and the Merseyside outfit are in a strong position to keep hold of him as the team progresses in the premier league.

With current league report showing that Everton are presently in second position in the league table and they are scheduled to face Fleetwood Town in the EFL Cup third round  very soon.

newsaffairng - November 3, 2021
0
Load more
Newsaffairng is a joint venture of great people of like mind and friends who see news in their area as important as the food they eat. The story of our love for infrmation and News was mainly for those who believed that there is no news that is complete until is ready by all.Packed with statistics,fact,figures and insight knowledge of some area(sport,Health & Tech) needed by people to get awareness we hope to provide our reader/viewers something different from the usual. It was designed,developed and maintained with one thing in mind which is to bring to his viewers a first class information on areas of Sport,Health,Technology and general news from the horses month. Newsaffairng is born to provide exclusive player and manager interviews of football and providing viewer/fans with current features,match preview analysis,Technology update and health news etc. Newsaffairng is working on employing a large number of dedicated team of staff editors and freelance reporters to add to the few we have so that they can produce rich content around the world.Both editors and freelance are scattered over the continent with good knowledge of sport(football),Health and Technology. We cover a wider range of topics which have made our reader able to enjoy what we have to offer.
Contact us: Justnewsaffair@yahoo.com

SCORE ANALYSIS BETWEEN CHELSEA AND LIVERPOOL