No law for placeholders in lieu of running mates ‘ INEC

2023 Elections: No one can buy my integrity ‘ INEC REC tells politicians

2023 Elections: ‘No one can buy our integrity’ ‘ INEC boasts, tells politicians

Ekpoudom kicks as APC submits Akpabio’s name, others to INEC

Osinachi had only ulcer; her husband calls me witch, mother tells court

Strike: We’re waiting for govt’s reply to our presentation ‘ ASUU

Court steps down Osinachi husband’s case due to multiple counsel

The era of lame-duck is here

Segun Oni and lessons of the Ekiti guber election

The world and Nigeria’s 2023 elections 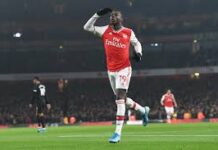