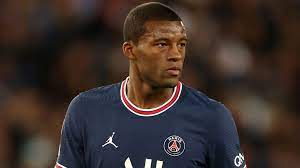 Report currently trending from most sport analyst are saying that the Gunners are currently very short in the midfield department with Thomas Partey and Mohamed Elneny away on international duty.

It was also noted that Ainsley Maitland-Niles was recently loaned out to Roma and with the above situation the club are missing Granit Xhaka due to coronavirus.

This leaves them with only Albert Sambi Lokonga as a specialist central midfielder.

Based on the current situation with the club which might lead to the Gunners ready to up their interest in Wijnaldum, who could leave Les Parisiens in the coming weeks.

Although it was noted that the Dutchman joined the Ligue 1 giants on a free transfer from Liverpool last summer, but he has struggled to nail down a starting spot.

He is open to a Premier League return, and it is claimed that the Gunners could prise him away for a fee between €15-20 million.

Wijnaldum previous spent six seasons in the English top-flight, five of those with Liverpool where he was a consistent starter with the league champion.

Manchester United have confirmed the return of CR7 from Juventus on a permanent deal.

newsaffairng - April 21, 2022
0
Load more
Newsaffairng is a joint venture of great people of like mind and friends who see news in their area as important as the food they eat. The story of our love for infrmation and News was mainly for those who believed that there is no news that is complete until is ready by all.Packed with statistics,fact,figures and insight knowledge of some area(sport,Health & Tech) needed by people to get awareness we hope to provide our reader/viewers something different from the usual. It was designed,developed and maintained with one thing in mind which is to bring to his viewers a first class information on areas of Sport,Health,Technology and general news from the horses month. Newsaffairng is born to provide exclusive player and manager interviews of football and providing viewer/fans with current features,match preview analysis,Technology update and health news etc. Newsaffairng is working on employing a large number of dedicated team of staff editors and freelance reporters to add to the few we have so that they can produce rich content around the world.Both editors and freelance are scattered over the continent with good knowledge of sport(football),Health and Technology. We cover a wider range of topics which have made our reader able to enjoy what we have to offer.
Contact us: Justnewsaffair@yahoo.com

Mario Pasalic finally move to Seria A Atalanta BC