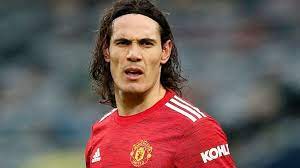 Report have continued to show that Manchester United striker Edinson Cavani has emerged as a potential January target for Barcelona,
in the next transfer window

It was generally noted that the Uruguayan has seen limited playing time this season with Cristiano Ronaldo preferred ahead of him up front for now.

Startistics have it that he recently started in a front two alongside the Portuguese, but there is still uncertainty over his place in the line up which is currently dominated by the CR7.

Based on inhouse report which shows that Cavani will enter the final six months of his deal in January and it is believed that the Blaugrana will push to sign him for a nominal fee.

It is unclear whether United will enter the prospect of losing the marksman midway through the campaign without a replacement.

They have adequate options in the ranks with Anthony Martial, Marcus Rashford and Mason Greenwood capable of leading the line also for the premier league giant.

However, none of them offer the same physical presence as Cavani up front. The Red Devils could risk losing him for free next summer.

Although Cavani signed a new one-year deal earlier this year after netting 17 goals last term. However, he would not have expected Ronaldo’s shock return.

Ronaldo has been an undisputed striker choice for the Manchester United this season with Cavani has often found himself on the substitutes’ bench.

newsaffairng - May 17, 2022
0
Load more
Newsaffairng is a joint venture of great people of like mind and friends who see news in their area as important as the food they eat. The story of our love for infrmation and News was mainly for those who believed that there is no news that is complete until is ready by all.Packed with statistics,fact,figures and insight knowledge of some area(sport,Health & Tech) needed by people to get awareness we hope to provide our reader/viewers something different from the usual. It was designed,developed and maintained with one thing in mind which is to bring to his viewers a first class information on areas of Sport,Health,Technology and general news from the horses month. Newsaffairng is born to provide exclusive player and manager interviews of football and providing viewer/fans with current features,match preview analysis,Technology update and health news etc. Newsaffairng is working on employing a large number of dedicated team of staff editors and freelance reporters to add to the few we have so that they can produce rich content around the world.Both editors and freelance are scattered over the continent with good knowledge of sport(football),Health and Technology. We cover a wider range of topics which have made our reader able to enjoy what we have to offer.
Contact us: Justnewsaffair@yahoo.com

I AM PREPARED TO FIGHT FOR A PLACE IN CHELSEA SAY...