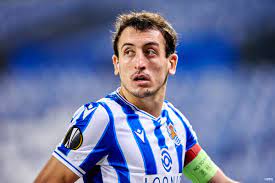 Report have been gathered that premier league giant Manchester City have identified Real Sociedad winger Mikel Oyarzabal as a priority transfer target for the summer of 2022.

Based on inhouse sources saying that the 24-year-old has risen through the youth ranks at Sociedad and has enjoyed a good 2020-21 season by been able to register 11 goals and eight assists in 33 La Liga matches.

It was noted in the last transfer window that City forked out a British transfer record sum of £100m to prise Jack Grealish away from Aston Villa in the most recent transfer window and CityPep Guardiola is looking at getting a new centre-forward at the end of this season.

Although based on relaible report as stated saying that that Oyarzabal is a good left-winger and also currently on the radar of City chiefs, who could now seek to trigger his £67m release clause next summer if agreed by the board management.

Report also states that Citizens are unlikely to reignite their pursuit of Tottenham Hotspur’s Harry Kane as Bernardo Silva’s possible exit will open up space for more attacking acquisitions for the club.

Current finds shows that Oyarzabal has already boasts four goals from four La Liga games this season and impressed with Spain at the Tokyo 2020 Olympics, banking three goals and two assists en route to the silver medal as noted.

Liverpool in the Market for any signing likely Ismaila Sarr from...