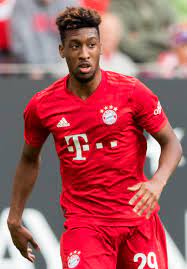 With report here and their showing that Bayern Munich winger Kingsley Coman has reportedly emerged as a summer transfer target for Liverpool who are considering making up for the Holland machine that just moved away.

According to football scout saying that the Merseyside giants are no strangers to having conducted business with a Bundesliga side, having signed defender Ibrahima Konate from RB Leipzig last month to join their team.

Information from reputable media houses shows that Liverpool have started the process of trying to sign Coman from Bayern by making contact with his representatives to know their standing faith.

The report suggests that the Premier League giants want to take advantage of the France international having just two years remaining on his Bayern contract.

It must be noted that recently-appointed head coach Julian Nagelsmann is attempting to rectify the situation by pushing Bayern officials to agree fresh terms with the 25-year-old as away of allowing him to stay with the club longer.

newsaffairng - August 10, 2021
0
Load more
Newsaffairng is a joint venture of great people of like mind and friends who see news in their area as important as the food they eat. The story of our love for infrmation and News was mainly for those who believed that there is no news that is complete until is ready by all.Packed with statistics,fact,figures and insight knowledge of some area(sport,Health & Tech) needed by people to get awareness we hope to provide our reader/viewers something different from the usual. It was designed,developed and maintained with one thing in mind which is to bring to his viewers a first class information on areas of Sport,Health,Technology and general news from the horses month. Newsaffairng is born to provide exclusive player and manager interviews of football and providing viewer/fans with current features,match preview analysis,Technology update and health news etc. Newsaffairng is working on employing a large number of dedicated team of staff editors and freelance reporters to add to the few we have so that they can produce rich content around the world.Both editors and freelance are scattered over the continent with good knowledge of sport(football),Health and Technology. We cover a wider range of topics which have made our reader able to enjoy what we have to offer.
Contact us: Justnewsaffair@yahoo.com

Mancity ready to consider having Messi.