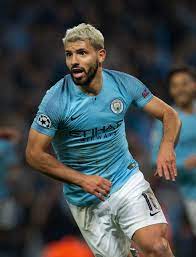 Report from the EPL show that both Manchester United and Chelsea have shown their interest in signing City playmaker Sergio Aguero when he leaves Manchester City at the end of the season on a free transfer.

It was noted that the Argentina international told football fans and report on Monday that is close to the exist door at the Etihad Stadium when his contract expires in June with no hope of any renew from club management.

History have it that Aguero who is City’s all-time leading goal scorer will have to leave the club in honour as he is also the fourth-highest in Premier League goal history.

Report from other media also confirms that the Argentine might stay in the premier league as offer are currently showing up by Manchester United and Chelsea.

Although the City playmaker claims that he still have alot to offer irrespective of his age is currently been monitored by the two club who are currently in market for a top striker.

It must be noted that that both team are also considering getting Borussia Dortmund’s Erling Braut Haaland but they both believe that Aguero will be cheaper and also better alternative.

Other club who are also monitoring the situation at City are Inter Milan, Barcelona and Paris Saint-Germain where report shows that Mauricio Pochettino is a huge admirer of the player and will be happy to get him at a good cost.

Barcelona willing to offload and ready for offers on Raphinha, Ansu...

Cody Drameh on his way to medical tests as new Luton...