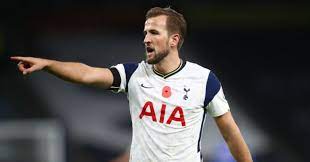 It was an established fact that the 27-year-old British man is also enjoying another impressive campaign at club level with 27 goals and 16 assists credited to him in 40 appearances for the club in all competitions.

Club report shows that Harry Kane has a contract at the Tottenham Hotspur Stadium until June 2024 and with the look of thing is like the England captain is keen to move on in search of trophies for his careers.

Previous report shows that both Manchester United and Manchester City are seriously interested on the key man who have a combined 215 goals in 327 outings for his North London club in all competitions he played with the club.

With the Spanish giant believing that it will be cheaper to bring in Harry Kane than to bring in Borussia Dortmund’s Erling Braut Haaland and Paris Saint-Germain’s Kylian Mbappe who is seen as expensive player in their league.

With Former Man United centre-back Rio Ferdinand who recently stated that it could have been better for Kane to leave earlier when the ergo is still strong.

newsaffairng - June 15, 2022
0
Load more
Newsaffairng is a joint venture of great people of like mind and friends who see news in their area as important as the food they eat. The story of our love for infrmation and News was mainly for those who believed that there is no news that is complete until is ready by all.Packed with statistics,fact,figures and insight knowledge of some area(sport,Health & Tech) needed by people to get awareness we hope to provide our reader/viewers something different from the usual. It was designed,developed and maintained with one thing in mind which is to bring to his viewers a first class information on areas of Sport,Health,Technology and general news from the horses month. Newsaffairng is born to provide exclusive player and manager interviews of football and providing viewer/fans with current features,match preview analysis,Technology update and health news etc. Newsaffairng is working on employing a large number of dedicated team of staff editors and freelance reporters to add to the few we have so that they can produce rich content around the world.Both editors and freelance are scattered over the continent with good knowledge of sport(football),Health and Technology. We cover a wider range of topics which have made our reader able to enjoy what we have to offer.
Contact us: Justnewsaffair@yahoo.com

Palmeiras midfielder Danilo is now taking the final steps for his...