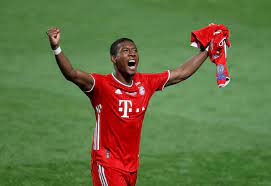 Bayern Munich top defender David Alaba have come out openly to reject his chance to join Chelsea on a free transfer during the summer.

Based on finding it was observed that the Austrian’s current deal with Bayern will expires at the end of June and he has told the his club that he will be willing to them after 13 years of his service.

Report shows that the Blues are seen as among the clubs who have approached his agent over a pre-contract and which the agent claimed that the defender is not interested in making the switch to Chelsea.

It was also noted that he has also rejected contract talk from high-flying Manchester City as he is not keen on making the move to the Premier League this summer.

With is current interview it was noted that Alaba has the preference to play in the Spanish La Liga and Real Madrid and Barcelona which he believe one of them will battle for his signature.

With the current formation of the Blues which football analyst believe they will pursue a new central defender this summer despite the resurgence of Antonio Rudiger and Andreas Christensen which they feel they are not consistent.

According to football observer who noted that both Rudiger and Christensen were out-of-favour under former boss Frank Lampard but where able to show their skills under the new Boss Thomas Tuchel.

Although it was observed that their contract is due to expire by the end of the next season and there are contract talk to put them back into the field.

newsaffairng - September 10, 2022
0
Load more
Newsaffairng is a joint venture of great people of like mind and friends who see news in their area as important as the food they eat. The story of our love for infrmation and News was mainly for those who believed that there is no news that is complete until is ready by all.Packed with statistics,fact,figures and insight knowledge of some area(sport,Health & Tech) needed by people to get awareness we hope to provide our reader/viewers something different from the usual. It was designed,developed and maintained with one thing in mind which is to bring to his viewers a first class information on areas of Sport,Health,Technology and general news from the horses month. Newsaffairng is born to provide exclusive player and manager interviews of football and providing viewer/fans with current features,match preview analysis,Technology update and health news etc. Newsaffairng is working on employing a large number of dedicated team of staff editors and freelance reporters to add to the few we have so that they can produce rich content around the world.Both editors and freelance are scattered over the continent with good knowledge of sport(football),Health and Technology. We cover a wider range of topics which have made our reader able to enjoy what we have to offer.
Contact us: Justnewsaffair@yahoo.com