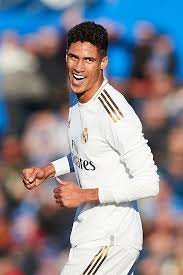 Recent report have shown that EPL giant Manchester United and Liverpool are already on alert with Real Madrid prepared to listen to offers for Raphael Varane during the summer as Madrid have set an asking price of £61m for their key man Raphael Varane.

Based on club record showing that Varane has been with the Spanish champions for almost a decade but his current stay with the club is uncertain with his contract expiring in June 2022 and the club is not willing to extend for the player based on his terms.

It must be noted that similar report from reliable sources both media and sport reporters shows that the club is reluctant to allow the Frenchman to stay next season unless he decide to puts pen-to-paper on a new contract for himself.

With the look of things it was noted from a reliable source that the Spanish giant Madrid are willing to consider bids of around £61m for the centre-back for now in case he fails to put pen on paper for a new contract and these have put two EPL giant like Manchester United and Liverpool on target if the centre back fails to stay with Madrid.

Previous report shows that Manchester United are long-term admirers of the established Frenchman and report also shows that they failed with an approach to sign him during the 2019 summer transfer window as a result of the amount they offered.

Sport Analyst believes that United might renew their pursuit in case the defender becomes available for purchase at a good price and report are also saying that Paris Saint-Germain and Liverpool have also been credited with an interest for the Frenchman.

newsaffairng - September 29, 2021
0
Load more
Newsaffairng is a joint venture of great people of like mind and friends who see news in their area as important as the food they eat. The story of our love for infrmation and News was mainly for those who believed that there is no news that is complete until is ready by all.Packed with statistics,fact,figures and insight knowledge of some area(sport,Health & Tech) needed by people to get awareness we hope to provide our reader/viewers something different from the usual. It was designed,developed and maintained with one thing in mind which is to bring to his viewers a first class information on areas of Sport,Health,Technology and general news from the horses month. Newsaffairng is born to provide exclusive player and manager interviews of football and providing viewer/fans with current features,match preview analysis,Technology update and health news etc. Newsaffairng is working on employing a large number of dedicated team of staff editors and freelance reporters to add to the few we have so that they can produce rich content around the world.Both editors and freelance are scattered over the continent with good knowledge of sport(football),Health and Technology. We cover a wider range of topics which have made our reader able to enjoy what we have to offer.
Contact us: Justnewsaffair@yahoo.com