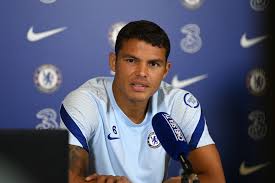 Report from respected Brazilian international defender Thiago Silva who openly told reporter that he enjoys Champions League football in Chelsea more than PSG because of the Premier League side’s previous success in Europe’s elite competition and other history about the Blues.

IT was noted that Silva moved to Stamford Bridge from PSG on a free transfer last summer after eight seasons with the Ligue 1 giants and have never regretted coming to the premier league side.

Although based on football history the Brazilian international has won 23 honors of which 7 were Ligue 1 titles but still about to test Champions League trophy.

It was noted that the Ligue 1 champions PSG came VERY close to winning the Champions League tile last term after getting to the final last summer under current Chelsea head coach Thomas Tuchel but they were defeated 1-0 by the current champion Bayern Munich.

Quoting the respected playmaker in his own words saying that “At PSG, the pressure to win a first Champions League is immense. The team works around this objective, not to win Ligue 1,” Silva reporters

He further stated that “It’s no use doing a clean sweep of the domestic titles, as we did a few times, but being knocked out in the last 16 or the last eight of Europe.

“It always seemed like if that happened, the whole season was s**t – it felt over once we exited the Champions League.

Finally he also said “At Chelsea, however, there’s a very different atmosphere regarding European football. The club has already managed to lift that trophy, and winning the Premier League title is also one of our priorities.”

newsaffairng - June 9, 2022
0
Load more
Newsaffairng is a joint venture of great people of like mind and friends who see news in their area as important as the food they eat. The story of our love for infrmation and News was mainly for those who believed that there is no news that is complete until is ready by all.Packed with statistics,fact,figures and insight knowledge of some area(sport,Health & Tech) needed by people to get awareness we hope to provide our reader/viewers something different from the usual. It was designed,developed and maintained with one thing in mind which is to bring to his viewers a first class information on areas of Sport,Health,Technology and general news from the horses month. Newsaffairng is born to provide exclusive player and manager interviews of football and providing viewer/fans with current features,match preview analysis,Technology update and health news etc. Newsaffairng is working on employing a large number of dedicated team of staff editors and freelance reporters to add to the few we have so that they can produce rich content around the world.Both editors and freelance are scattered over the continent with good knowledge of sport(football),Health and Technology. We cover a wider range of topics which have made our reader able to enjoy what we have to offer.
Contact us: Justnewsaffair@yahoo.com