Uzodimma vs Okorocha feud: Why Buhari, APC must intervene – Group

Several fighters killed as ISWAP and Boko Haram battle each other

No one can displace me in Osun APC –…

Gov. Ortom: Fulani has hidden agenda to over run…

With Adesina, Okonjo-Iweala and others, Nigeria attains Human Resource Power status under…

APC will take over Enugu state in 2023, says Nnadozie..

Omokri’s note to Sheik Gumi over amnesty for bandits

Per capita income of Chinese residents continues to grow 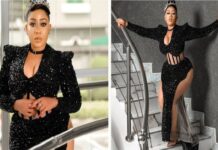