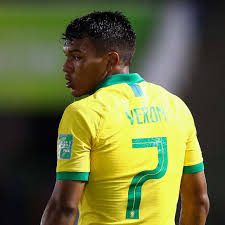 Two EPL giant Manchester City and Manchester United are reportedly seen as willing to going head to head for the signature of Palmeiras youngster Gabriel Veron who they consider as a raising asset with the club.

Credited to the 18-year-old who have scored 11 times and registered five assists in 36 appearances for his Brazilian club these season is believed to have captured the attention of a number of European teams willing to have him in their squad.

Recently it was noted that even Spanish giant Barcelona have been strongly linked with the attacker but according to report from Football analyst showing that City and United are leading the race to sign the Brazilian.

It must be noted that recent report claims that the two EPL clubs are both negotiating with the youngster’s representatives in the hope of agreeing personal terms ahead of a €20m (£17.7m) move to their club.

Football scout are saying that both City and United are both prepared for the Brazilian to finish well in these season with Palmeiras before moving to the Premier League during this summer’s transfer window soon.

Judging the club information according to Campeao do Seculo who strongly said ” when it comes to the teenager’s future as they have him on a contract until September 2025 with a release clause of €60m (£53m)”.

Credit to Veron football career as noted to have won the Golden Ball at the 2019 Under-17 World Cup as he helped Brazil lift the trophy to their side.

newsaffairng - November 22, 2021
0
Load more
Newsaffairng is a joint venture of great people of like mind and friends who see news in their area as important as the food they eat. The story of our love for infrmation and News was mainly for those who believed that there is no news that is complete until is ready by all.Packed with statistics,fact,figures and insight knowledge of some area(sport,Health & Tech) needed by people to get awareness we hope to provide our reader/viewers something different from the usual. It was designed,developed and maintained with one thing in mind which is to bring to his viewers a first class information on areas of Sport,Health,Technology and general news from the horses month. Newsaffairng is born to provide exclusive player and manager interviews of football and providing viewer/fans with current features,match preview analysis,Technology update and health news etc. Newsaffairng is working on employing a large number of dedicated team of staff editors and freelance reporters to add to the few we have so that they can produce rich content around the world.Both editors and freelance are scattered over the continent with good knowledge of sport(football),Health and Technology. We cover a wider range of topics which have made our reader able to enjoy what we have to offer.
Contact us: Justnewsaffair@yahoo.com