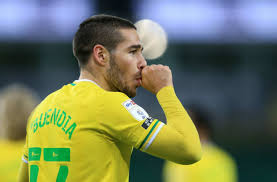 It is believed that the Gunners are not sleeping as reported by football correspond ant saying that they have shown interest in Norwich City playmaker Emi Buendia as a potential replacement for Mesut Ozil who is heading to the exist door.

It is believe that the Gunners will have to make some changes in the attacking midfield department in the near future after a slow start to these season.

It is observed that Mikel Arteta’s side lacking spark in the final third after the manager’s decision to leave Ozil out of his squad was considered as permanent.

Arsenal respected playmaker Ozil now looks set to join Fenerbahce as he arrives in Turkey for a medical as quoted by Sky Sports.

Quoting Kaveh Solhekol of Sky Sports who claimed that the Gunner are interested in getting in-form Norwich star Buendia which could cost as much as £50million to sign in this January as his club are determined to keep hold of him for now.

Although the Canaries are chasing promotion to the Premier League and don’t seem under much pressure to sell at the playmaker with the club Boss Solhekol adding that the player is focused on his current club for now.

newsaffairng - March 21, 2022
0
Load more
Newsaffairng is a joint venture of great people of like mind and friends who see news in their area as important as the food they eat. The story of our love for infrmation and News was mainly for those who believed that there is no news that is complete until is ready by all.Packed with statistics,fact,figures and insight knowledge of some area(sport,Health & Tech) needed by people to get awareness we hope to provide our reader/viewers something different from the usual. It was designed,developed and maintained with one thing in mind which is to bring to his viewers a first class information on areas of Sport,Health,Technology and general news from the horses month. Newsaffairng is born to provide exclusive player and manager interviews of football and providing viewer/fans with current features,match preview analysis,Technology update and health news etc. Newsaffairng is working on employing a large number of dedicated team of staff editors and freelance reporters to add to the few we have so that they can produce rich content around the world.Both editors and freelance are scattered over the continent with good knowledge of sport(football),Health and Technology. We cover a wider range of topics which have made our reader able to enjoy what we have to offer.
Contact us: Justnewsaffair@yahoo.com

Facundo Torres reveals contact with Arsenal regarding his transfer