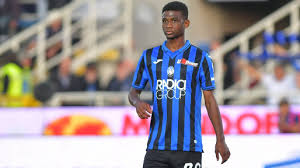 With the new transfer window in place ,Premier league giant Manchester United have come out openly to confirmed that their new signing Amad Diallo will be granted with a shirt No.19.

It must be noted that Diallo who finally completed his transfer from Atalanta to United with an initial fee of £18million plus significant add-ons all included in the transfer..

Based on report from United Boss Ole Gunnar Solskjaer saying that the Ivorian joins United having made his name as a talented young winger in Italy.

Based on football analyst view saying that United have now completed the transfer of the 18-year-old playmaker and he is expected to wear the No.19 for the club which was previously worn by Marcus Rashford, Danny Welbeck and Dwight Yorke, among others at Old Trafford.

Quoting the club Boss saying that the newly transferred player will also have his first name ‘Amad’ on the back, having legally changed his surname from Traore to Diallo last September.

It was also noted that united player who have worn the No.19 at united include goalkeeper Edwin van der Sar, Ronny Johnsen, another goalkeeper in Ricardo, Eric Djemba-Djemba, Gerard Pique and James Wilson. Diallo wore No.79 at Atalanta.

Finally the United boss was quoted saying “I think he will do well but it important to keep calm with him. He’s a top man. I spoke with him and hisefamily. Now the guy is very happy to sign for Manchester United. Everybody waits for him and that’s it.”

newsaffairng - June 14, 2021
0
Load more
Newsaffairng is a joint venture of great people of like mind and friends who see news in their area as important as the food they eat. The story of our love for infrmation and News was mainly for those who believed that there is no news that is complete until is ready by all.Packed with statistics,fact,figures and insight knowledge of some area(sport,Health & Tech) needed by people to get awareness we hope to provide our reader/viewers something different from the usual. It was designed,developed and maintained with one thing in mind which is to bring to his viewers a first class information on areas of Sport,Health,Technology and general news from the horses month. Newsaffairng is born to provide exclusive player and manager interviews of football and providing viewer/fans with current features,match preview analysis,Technology update and health news etc. Newsaffairng is working on employing a large number of dedicated team of staff editors and freelance reporters to add to the few we have so that they can produce rich content around the world.Both editors and freelance are scattered over the continent with good knowledge of sport(football),Health and Technology. We cover a wider range of topics which have made our reader able to enjoy what we have to offer.
Contact us: Justnewsaffair@yahoo.com