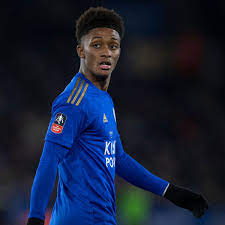 According to media Report saying that Tottenham Hotspur are among the four Premier League clubs interested in a deal for Leicester City outcast Demarai Gray.

Based on recent interview with Foxes manager Brendan Rodgers who currently admitted that the 24-year-old Demarai Gray is likely to be plying his trade somewhere else next season after falling out of favour with the club Tactician.

Although Gray was known to be part of the 2015-16 Leicester title-winning team, but the established and respected winger has only made one appearance for the senior side this season in the EFL Cup and is about to enter the final six months of his current club deal.

Similar media report from 90 Min also states that Tottenham is one of the leading admirers of Gray despite irrespective of his lack of first-team action this season ,with Everton ,Southampton and Crystal Palace are also ready to do battle for his signature of the player next season.

Based on club statistics showing that Gray has made four appearances in the 2020-21 Premier League 2 campaign with three goals and one assist credited to is profile.

With Leicester having identified Celtic’s Ryan Christie – who worked with Rodgers during his days in Scotland is seen as a potential replacement for Gray and will be willing to spend a whopping sum of £30m if the club must release him to them.

newsaffairng - October 4, 2021
0
Load more
Newsaffairng is a joint venture of great people of like mind and friends who see news in their area as important as the food they eat. The story of our love for infrmation and News was mainly for those who believed that there is no news that is complete until is ready by all.Packed with statistics,fact,figures and insight knowledge of some area(sport,Health & Tech) needed by people to get awareness we hope to provide our reader/viewers something different from the usual. It was designed,developed and maintained with one thing in mind which is to bring to his viewers a first class information on areas of Sport,Health,Technology and general news from the horses month. Newsaffairng is born to provide exclusive player and manager interviews of football and providing viewer/fans with current features,match preview analysis,Technology update and health news etc. Newsaffairng is working on employing a large number of dedicated team of staff editors and freelance reporters to add to the few we have so that they can produce rich content around the world.Both editors and freelance are scattered over the continent with good knowledge of sport(football),Health and Technology. We cover a wider range of topics which have made our reader able to enjoy what we have to offer.
Contact us: Justnewsaffair@yahoo.com

Barcelona willing to offload and ready for offers on Raphinha, Ansu...

Sergio Aguero Currently Been Monitored By Inter Milan,Chelsea And Barcelona.