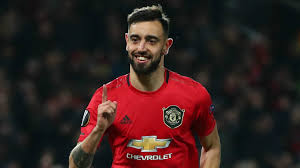 Report from Manchester United management are saying that they are working on rewarding Bruno Fernandes with a bumper new deal which would see his wages at Old Trafford double if the deal is agree on.

It must be noted that the Portugal international has shown to the club since his arrival that he is a key player for United which he proved  his importance to Ole Gunnar Solskjaer’s side against West Ham United recently.

Judging from the recent match against Westham, Fernandes who was initially named on the bench and was brought on when Manchester United were 1-0 down at a point that united was almost losing hoping and was able to change the game pattern which finally lead to victory for united in a 3-1 victory.

Similar report from reputable media house also report the claim that United are now prepared to offer Fernandes a lucrative new deal worth £200,000 per week at Old Trafford which means that the 26-year-old is likely to see a double of is wage range from £100k per week in Manchester to £200 if the deal will pass through.

Although Fernandes will now see his current wage range double and his deal expire until 2025 which makes him stand below Pogba and David De Gea who is currently know to earn a £350,000-per-week deal.

Based on club record, Fernandes has already netted 10 times this season in all competitions he is involved with six assist currently credited to his profile.

newsaffairng - July 15, 2022
0
Load more
Newsaffairng is a joint venture of great people of like mind and friends who see news in their area as important as the food they eat. The story of our love for infrmation and News was mainly for those who believed that there is no news that is complete until is ready by all.Packed with statistics,fact,figures and insight knowledge of some area(sport,Health & Tech) needed by people to get awareness we hope to provide our reader/viewers something different from the usual. It was designed,developed and maintained with one thing in mind which is to bring to his viewers a first class information on areas of Sport,Health,Technology and general news from the horses month. Newsaffairng is born to provide exclusive player and manager interviews of football and providing viewer/fans with current features,match preview analysis,Technology update and health news etc. Newsaffairng is working on employing a large number of dedicated team of staff editors and freelance reporters to add to the few we have so that they can produce rich content around the world.Both editors and freelance are scattered over the continent with good knowledge of sport(football),Health and Technology. We cover a wider range of topics which have made our reader able to enjoy what we have to offer.
Contact us: Justnewsaffair@yahoo.com