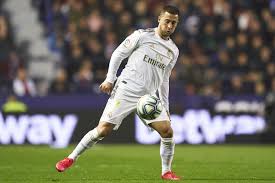 Report is showing that Real Madrid are currently weighing the option of cutting their losses with Eden Hazard and might use the Belgian forward as a makeweight to negotiate for Kylian Mbappe from Paris Saint-Germain in the coming transfer window.

It was noted by Madrid management and football scouts that former Chelsea playmaker Hazard has been a major flop since arriving in the Spanish capital from the Blues last year for a fee that is believed to be exceed £150m.

Although the 29-year-old playmaker qualities have been hampered by injury and fitness issues and which has restricted him to 25 starts in all competitions since the beginning of 2019-20.

Based on the information confirmed by a reliable sport media saying the the Spanish Giant Madrid want to get Hazard off their books next year and have decided to use the player as a negotiating condition to get PSG Mbpape.

With Real Madrid making PSG forward Mbappe their top target for 2021 and also willing to provide a sizeable fee to be add to Hazard then it is believed that the transfer will proof profitable.

It must be noted that Hazard will not be able to feature With his current injury and these will lead to him not featuring in any match before next year.

newsaffairng - March 29, 2022
0
Load more
Newsaffairng is a joint venture of great people of like mind and friends who see news in their area as important as the food they eat. The story of our love for infrmation and News was mainly for those who believed that there is no news that is complete until is ready by all.Packed with statistics,fact,figures and insight knowledge of some area(sport,Health & Tech) needed by people to get awareness we hope to provide our reader/viewers something different from the usual. It was designed,developed and maintained with one thing in mind which is to bring to his viewers a first class information on areas of Sport,Health,Technology and general news from the horses month. Newsaffairng is born to provide exclusive player and manager interviews of football and providing viewer/fans with current features,match preview analysis,Technology update and health news etc. Newsaffairng is working on employing a large number of dedicated team of staff editors and freelance reporters to add to the few we have so that they can produce rich content around the world.Both editors and freelance are scattered over the continent with good knowledge of sport(football),Health and Technology. We cover a wider range of topics which have made our reader able to enjoy what we have to offer.
Contact us: Justnewsaffair@yahoo.com