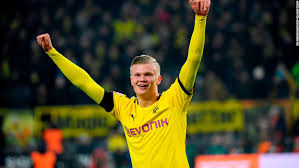 Based on facts from football scouts saying that the 20-year-old has been in sensational and super form for Dortmund since joining the club from Red Bull Salzburg in January with 26 goals in 28 appearances credited to his record in all competitions.

The established super star Haaland has already netted 10 times in 10 outings for Dortmund these season, including four goals in three Champions League fixtures which shows  an excellent start to the 2020-21 champions league season.

It must be noted that EPL Giant United were also linked with the Dortmund player earlier this year but the Spanish giant Madrid have also been on these case for a while with more interest building from top European teams.

One fact is sure which makes Madrid very optimistic in signing of Norway international and they believe that with a strong relationship between them and Dortmund will help them win the race for the players signature.

The Spanish giant are considering the Dortmund player are a perfect replacement for the French striker Karim Benzema who is seen as entering the latter stages of his career with the club.

Club record shows that the Dortmund player current deal with the club runs un until June 2024 without a clause for now.

newsaffairng - August 29, 2022
0
Load more
Newsaffairng is a joint venture of great people of like mind and friends who see news in their area as important as the food they eat. The story of our love for infrmation and News was mainly for those who believed that there is no news that is complete until is ready by all.Packed with statistics,fact,figures and insight knowledge of some area(sport,Health & Tech) needed by people to get awareness we hope to provide our reader/viewers something different from the usual. It was designed,developed and maintained with one thing in mind which is to bring to his viewers a first class information on areas of Sport,Health,Technology and general news from the horses month. Newsaffairng is born to provide exclusive player and manager interviews of football and providing viewer/fans with current features,match preview analysis,Technology update and health news etc. Newsaffairng is working on employing a large number of dedicated team of staff editors and freelance reporters to add to the few we have so that they can produce rich content around the world.Both editors and freelance are scattered over the continent with good knowledge of sport(football),Health and Technology. We cover a wider range of topics which have made our reader able to enjoy what we have to offer.
Contact us: Justnewsaffair@yahoo.com