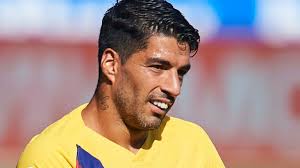 Former Barcelona playmaker Luis Suárez has spoken from his heart how pleased he is to be at Atlético Madrid after leaving Barcelona saying that he’s willing to defend his new shirt “to the death”.

It must be recalled that Suárez – nicknamed El Pistolero or The Gunman who joined Atletico Madrid from Barcelona after spending six trophy-laden years with Barcelona is very pleased to showcase his skill in his new club after leaving the Spanish Giant.

Based on club report from Barcelona saying that the Uruguayan was deemed surplus to requirements at Camp Nou by new boss Ronald Koeman despite his impressive skill  and lovely appearances for the club last season.
The 33-year -old Uruguayan was later seen as a player whose form drop after a couple of years with Barcelona but still managed to have 21 goals and 12 assists credited to his 36 competitive appearances with the club.

As noted by football observers saying that since his coming to Atletico Madrid, Suárez has been able to scored four goals and one assist in eight competitive appearances for is new club.

Although football scout describe him as a player who is fired with enthusiasm to prove that he is still a force to recon with in football at anytime.

Quoting the playermaker interview with sports analyst saying how pleased he is with life in Madrid and also saying “How competitive my teammates are on a day-to-day basis with each one supporting the other to see if their goal will be achieved at all times.

Still quoting the player saying that he will not celebrate whenever he scores against his former club as he continue to respect Barcelona based on all the good they did to him when he just moved from Liverpool to Barcelona but still going to defend the Atlético shirt to the death as I have defended all the shirts of all the teams in which I have played according to him.

I want to say that i don’t need anybody to tell me that am wanted in Atletico Madrid because the Coach Simeone continue to show me that he want me at the club on daily basis.

Suarez believed that he feel loved and the coach shows interest, there isn’t much conviction needed. They value you like you weren’t being valued elsewhere, and that’s important to me for now.

newsaffairng - December 27, 2021
0
Load more
Newsaffairng is a joint venture of great people of like mind and friends who see news in their area as important as the food they eat. The story of our love for infrmation and News was mainly for those who believed that there is no news that is complete until is ready by all.Packed with statistics,fact,figures and insight knowledge of some area(sport,Health & Tech) needed by people to get awareness we hope to provide our reader/viewers something different from the usual. It was designed,developed and maintained with one thing in mind which is to bring to his viewers a first class information on areas of Sport,Health,Technology and general news from the horses month. Newsaffairng is born to provide exclusive player and manager interviews of football and providing viewer/fans with current features,match preview analysis,Technology update and health news etc. Newsaffairng is working on employing a large number of dedicated team of staff editors and freelance reporters to add to the few we have so that they can produce rich content around the world.Both editors and freelance are scattered over the continent with good knowledge of sport(football),Health and Technology. We cover a wider range of topics which have made our reader able to enjoy what we have to offer.
Contact us: Justnewsaffair@yahoo.com