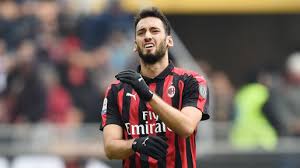 Manchester United are plotting a move for out-of-contract AC Milan ace Hakan Calhanoglu next summer, according to reports from italy as confirmed by our reporter.

Report is clear now that Manchester United are preparing to offer AC Milan attacker Hakan Calhanoglu a five-year contract to enable him move to Old Trafford on a free transfer mode by January.

Based on club finding the 26 year Old Calhanoglu is set to become a free agent in next transfer window after rejecting a negotiation with his current club over an extension.

Although it was noted that the established winger has been in an excellent form for Milan during the 2020-21 campaign with four goals and four assists all credited to him in all competitions.

The £54,000-a-week winger who rejected a contract extension at the San Siro has alerted  a number of top clubs in Europe showing that the player is heading to the exist lane.

It must be noted that similar report from dailies have confirmed that United are highly interested in bringing the winger to the premier league next season with United Boss Ole Gunnar Solskjaer’s side willing to tempt the attacker with the offer of a five-year lucrative contract but AC Milan still believes that they have hope in agreeing fresh terms with the winger before the end of 2020.

Calhanoglu who moved to San Siro from Bayer Leverkusen in 2017 and was able to make 137 appearances for the Italian giants in all competitions with 27 goals and 40 assists credited to is stay in San Siro.

With United Contract terms including a pay rise on his current wages and it is believed that AC Milan chiefs are expected to hold further talks with the winger to enable him accept their terms.

newsaffairng - December 1, 2021
0
Load more
Newsaffairng is a joint venture of great people of like mind and friends who see news in their area as important as the food they eat. The story of our love for infrmation and News was mainly for those who believed that there is no news that is complete until is ready by all.Packed with statistics,fact,figures and insight knowledge of some area(sport,Health & Tech) needed by people to get awareness we hope to provide our reader/viewers something different from the usual. It was designed,developed and maintained with one thing in mind which is to bring to his viewers a first class information on areas of Sport,Health,Technology and general news from the horses month. Newsaffairng is born to provide exclusive player and manager interviews of football and providing viewer/fans with current features,match preview analysis,Technology update and health news etc. Newsaffairng is working on employing a large number of dedicated team of staff editors and freelance reporters to add to the few we have so that they can produce rich content around the world.Both editors and freelance are scattered over the continent with good knowledge of sport(football),Health and Technology. We cover a wider range of topics which have made our reader able to enjoy what we have to offer.
Contact us: Justnewsaffair@yahoo.com

Chelsea defender Andreas Christensen yet to make future decision about his...