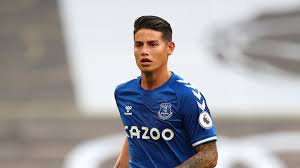 Based on information from Spanish Giant Real Madrid’s management saying that they are not really happy the way James Rodriguez was allowed to leave the club these season and was  mainly caused by the Madrid coach Zidane  which never allow the player show off his skills.

it was noted that James struggled to become a regular team player under Zidane and was only able to make 14 appearances across all competitions last term irrespective of his inform position.

Based on club statistics it was observed that the playmaker only had a year left on his  club contract  and was able to  made a surprise move to Everton on a free transfer where he was able to prove his worth.

Current performance has shown that James Rodriguez is one of Everton leading performers with three goals and four assists from six games credited to him.

Similar report has shown that the Board are highly disappointment over Zidane ways of handling of James Rodriguez issue after the playmaker was  able to revived his career in the EPL club  in England.

Other percentage of the Board hierarchy feels that Zidane should have considered Gareth Bale, Dani Ceballos and Sergio Reguilon in his first-team plans to enable the team get a lift up in these current season

Although Bale and Ceballos joined EPL top side Tottenham Hotspur and the Gunners respectively on loan this summer while Reguilon sealed a permanent move to Spurs with a buy back clause of £40m next summer.

newsaffairng - June 11, 2021
0
Load more
Newsaffairng is a joint venture of great people of like mind and friends who see news in their area as important as the food they eat. The story of our love for infrmation and News was mainly for those who believed that there is no news that is complete until is ready by all.Packed with statistics,fact,figures and insight knowledge of some area(sport,Health & Tech) needed by people to get awareness we hope to provide our reader/viewers something different from the usual. It was designed,developed and maintained with one thing in mind which is to bring to his viewers a first class information on areas of Sport,Health,Technology and general news from the horses month. Newsaffairng is born to provide exclusive player and manager interviews of football and providing viewer/fans with current features,match preview analysis,Technology update and health news etc. Newsaffairng is working on employing a large number of dedicated team of staff editors and freelance reporters to add to the few we have so that they can produce rich content around the world.Both editors and freelance are scattered over the continent with good knowledge of sport(football),Health and Technology. We cover a wider range of topics which have made our reader able to enjoy what we have to offer.
Contact us: Justnewsaffair@yahoo.com