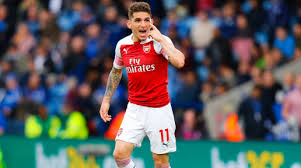 Spanish Giant Atletico Madrid and EPL respected side Arsenal are putting a final finishing touches on a loan deal that is expected to see Uruguay international Lucas Torreira make a transfer to Atletico Madrid. It was noted that the former Sampdoria and Pescara midfielder who moved to Arsenal two years ago is about to say his goodbyes to the Arsenal dressing room and will link up with his new club on Monday before the transfer deadline.

Based on the Loan deal it was understood that Torreira will move to Spain in a loan to buy deal. Atletico Madrid will pay an initial 1.85 million euros for Torreira’s loan deal, paying the midfielder’s full salary for the duration of his stay with them

Based on the above deal it was noted that at the end of the 2020-21 campaign Atletico manager the great Diego Simeone will then have the option to extend Torreira’s stay in a permanent transfer package worth an initial 16 million euros, with a further 3-4 million payments staggered over two years dependent on Atletico’s willingness to consider the deal.

Based on club statistics it was also noted by football analyst that Arsenal are still in the race to sign Atletico Madrid midfielder Thomas Partey and that talks are still ongoing to enable the Ghananian 27-year-old to move to the Emirates in the other direction to Torreira if the deal must be established before the transfer windows expires.

Jadon Sancho Back to Training.

Don’t use my name to attack Cristiano!’ – Man Utd star...