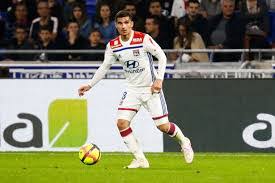 It has been noted that the Gunners have reportedly made a formal bid to sign Houssem Aouar from Lyon these season before the transfer deadline next month expires.

Based on football Analyst view saying that Arsenal have been heavily linked with the midfielder’s services over the past few weeks and they have now come up with a transfer offer for the player to enable him transfer his service to them.

Media report from Telefoot states that the north London giants have formally made a bid of around £35m for the playmaker who already have eight goals and 10 assists all credited to him across all competitions last term.

Other report also states that the north London club have already made enquiries to sign the highly-rated midfielder as Mikel Arteta wants to bolster his attacking these season .

Arsenal is looking at increasing their bid to the region of £40m to enable them secure the player signature.

Club report shows that Arsenal already have him in their their Wishlist these summer and they are trying to solidify what has already been on board by formally making a bid for the playermaker before the transfer deadline on October 5th.

It must be noted that Aouar has reportedly agreed to join the Gunners this summer and it remains to be seen whether they can convince Les Gones into parting ways with his services with a good bid.

Report from Les Gones, it is understood that they are demanding around £54m for the highly-rated Frenchman, but Arsenal are aiming to settle for a lesser fee with the inclusion of future add-ons to encourage the playmaker.

The Gunners have already sanction the sale of goalkeeper Emiliano Martinez to Aston Villa this summer and they are currently close to sanctioning the departure of another player which is a midfielder Lucas Torreira to Atletico Madrid to enable them raise fund.

Based on his achievement the 22-year-old, who was previously hailed as incredible by Pep Guardiola, was a star player for Lyon in their dream Champions League run last season

newsaffairng - October 7, 2021
0
Load more
Newsaffairng is a joint venture of great people of like mind and friends who see news in their area as important as the food they eat. The story of our love for infrmation and News was mainly for those who believed that there is no news that is complete until is ready by all.Packed with statistics,fact,figures and insight knowledge of some area(sport,Health & Tech) needed by people to get awareness we hope to provide our reader/viewers something different from the usual. It was designed,developed and maintained with one thing in mind which is to bring to his viewers a first class information on areas of Sport,Health,Technology and general news from the horses month. Newsaffairng is born to provide exclusive player and manager interviews of football and providing viewer/fans with current features,match preview analysis,Technology update and health news etc. Newsaffairng is working on employing a large number of dedicated team of staff editors and freelance reporters to add to the few we have so that they can produce rich content around the world.Both editors and freelance are scattered over the continent with good knowledge of sport(football),Health and Technology. We cover a wider range of topics which have made our reader able to enjoy what we have to offer.
Contact us: Justnewsaffair@yahoo.com