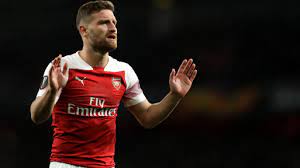 With Serie A Giant Lazio  currently leading the race to secure his services of Arsenal defender Mustafi and report claim that they are positive of signing him for an initial fee of around £10.5m before the transfer window expires.

It was well noted that the Arsenal defender Shkodran Mustafi could see his services transferred to Serie A with Lazio in mind in the days as the Germany international suffered a hamstring injury in the final weeks of the previous season with Arsenal.

Report from Club Doctor states that Mustafi is likely to return to full training by next month October but it appears that he could end his association with the Arsenal by then.

Similar report from sport media also states that the centre-back is likely to head through the exit door this summer with his contract expiring in 10 months’ time and with no plan of renewing his contract with the Gunners.

It was well noted that Premier League respected Club Arsenal have already bolstered their central defensive department this summer with the purchase of Gabriel Magalhaes from French side Lille.

Although the north London giants have also included William Saliba into their squad after undergoing a loan stint with Saint-Etienne.

Further information also shows that apart from Mustafi, player likes Calum Chambers and Sokratis are also heading to the exist door before the deadline of the transfer window next month October.

newsaffairng - November 8, 2021
0
Load more
Newsaffairng is a joint venture of great people of like mind and friends who see news in their area as important as the food they eat. The story of our love for infrmation and News was mainly for those who believed that there is no news that is complete until is ready by all.Packed with statistics,fact,figures and insight knowledge of some area(sport,Health & Tech) needed by people to get awareness we hope to provide our reader/viewers something different from the usual. It was designed,developed and maintained with one thing in mind which is to bring to his viewers a first class information on areas of Sport,Health,Technology and general news from the horses month. Newsaffairng is born to provide exclusive player and manager interviews of football and providing viewer/fans with current features,match preview analysis,Technology update and health news etc. Newsaffairng is working on employing a large number of dedicated team of staff editors and freelance reporters to add to the few we have so that they can produce rich content around the world.Both editors and freelance are scattered over the continent with good knowledge of sport(football),Health and Technology. We cover a wider range of topics which have made our reader able to enjoy what we have to offer.
Contact us: Justnewsaffair@yahoo.com

New Players to watch in the Bundesliga League these Season