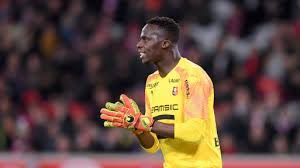 It was noted that Senegal international Edouard Mendy is reportedly undergoing a medical ahead of his summer move to Chelsea as the Blues are looking at strengthen their goal handling area these season.

Chelsea who recently agreed a deal worth £22m with Rennes for the goalkeeper and he is currently in London to finalize the necessary transfer if he is able to pass the Blues Medical.

Even sky Sports News report also states that the former Reim’s man has made his way to the Blues’ training complex and he is currently going through a series of medical examinations to enable him meet up the Blues condition.

Football Analyst are monitoring the situation and they are very optimistic that the transfer could be officially announced very soon provided there are no complications in the ongoing  medical tests.

It is a well known fact that his coming  is expected to replace Kepa Arrizabalaga, who has been disappointing during the last season.

Although the Spaniard has been widely criticized by the fans for his poor shot-stopping as noted by football fans and he recently made a blunder in the 2-0 league defeat to Liverpool at Stamford Bridge which was highly not accepted by club management.

While it since that the 25-year-old has no plans of pursuing a fresh challenge this summer and is likely to play second fiddle to Mendy during the course of the current campaign as noted by club management.

newsaffairng - June 14, 2021
0
Load more
Newsaffairng is a joint venture of great people of like mind and friends who see news in their area as important as the food they eat. The story of our love for infrmation and News was mainly for those who believed that there is no news that is complete until is ready by all.Packed with statistics,fact,figures and insight knowledge of some area(sport,Health & Tech) needed by people to get awareness we hope to provide our reader/viewers something different from the usual. It was designed,developed and maintained with one thing in mind which is to bring to his viewers a first class information on areas of Sport,Health,Technology and general news from the horses month. Newsaffairng is born to provide exclusive player and manager interviews of football and providing viewer/fans with current features,match preview analysis,Technology update and health news etc. Newsaffairng is working on employing a large number of dedicated team of staff editors and freelance reporters to add to the few we have so that they can produce rich content around the world.Both editors and freelance are scattered over the continent with good knowledge of sport(football),Health and Technology. We cover a wider range of topics which have made our reader able to enjoy what we have to offer.
Contact us: Justnewsaffair@yahoo.com

I have no plan to go any where because i want...